New gen Ford Figo was first launched in India back in 2015. But due to low sales, and launch of Freestyle, the car was discontinued from the Indian market last year. Now, loaded with more features, and updated styling, the Figo nameplate is back in India with 2019 model year update.

2019 Figo Facelift is being offered in three variants of Ambient, Titanium and Titanium BLU with the latter receiving a sportier stance with a contrasting roof line, chrome finished honeycomb grille and new 15” alloy wheels. Exterior updates across the range are similar to those seen on the Aspire facelift, which was launched last year in India. Ford claims that there are 1,200 changes (yes, twelve hundred) on board the Figo facelift. 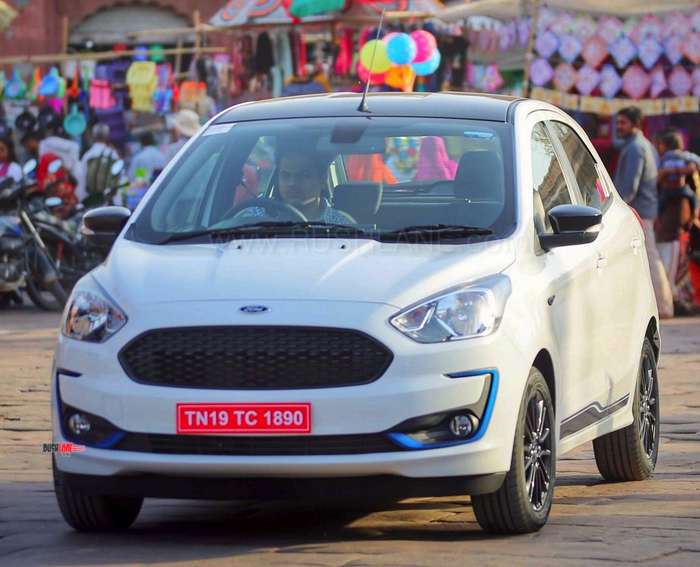 Anurag Mehrotra, president and managing director, Ford India, claims, “As a brand, Figo has been a preferred choice of first-time car buyer thanks to the practicality and value on offer. Suited for the fast-paced lifestyle of today’s customers, the 2019 Ford Figo continues to surprise on every count – be it looks, the fun of driving attributes, safety and not to miss, the most-affordable ownership experience.”

Interiors of 2019 Ford Figo also get updated with a black color scheme. There is also an updated instrument cluster, 8” touchscreen infotainment system offering Apple CarPlay, Android Auto and SYNC3. Titanium BLU variant gets distinctive BLU badging both on its exterior and interiors.

2019 Ford Figo gets 3 engine options. The 1.2 liter, 3 cylinder, Dragon series petrol engine will offer 94 bhp power and 120 Nm torque while the 1.5 liter TDCi diesel engine will be capable of 98 bhp power and 215 Nm torque. Both mated to a 5 speed manual transmission. There is also a 1.5 liter petrol engine which powers the current Figo, offering 123 PS power and 150 Nm torque mated to automatic transmission. Mileage claimed is 20.4 kmpl, 25.5 kmpl and 16.3 kmpl respectively. New Figo will take on Maruti Swift and Hyundai Grand i10.