First launched back in 2013, the Honda Amaze has been tasked with a rather Herculean effort of bringing the entry-level sedan buyers under Honda Cars India’s umbrella. The first-gen Amaze is basically a Brio with a bigger boot and a diesel engine option. Over its lifetime, it has done pretty well on the sales charts and has been successful in establishing itself as a well-sorted compact sedan that plays the perfect second-fiddle to the highly popular City C2-segmenter. 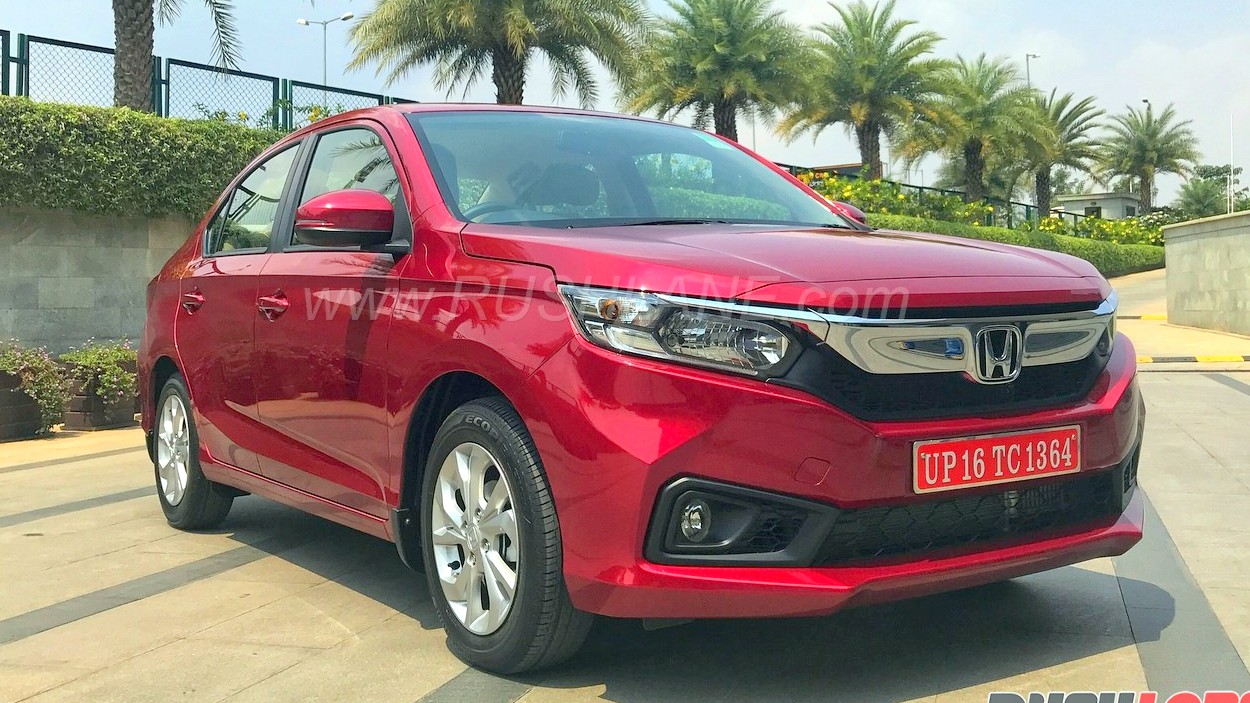 Now, however, Honda is about to launch the second-generation Amaze, which has been developed from the scratch and is no more a sedan that started life as a hatchback. The second-gen Amaze looks modern, has more equipment, and even offers an automatic transmission on both petrol and diesel engines. We recently drove the car to find out all that the new compact sedan has on offer. Here’s our New Honda Amaze test drive review –

The new Honda Amaze looks nothing like the model it is about to replace. The car’s design is based on the company’s latest design language, which means the aesthetics are somewhat similar to the ones on the latest City and the Civic. The front-end is characterized by a sleek pair of headlamps, a chrome-plated grille, a chunky bumper, and overall a rather boxy appearance. 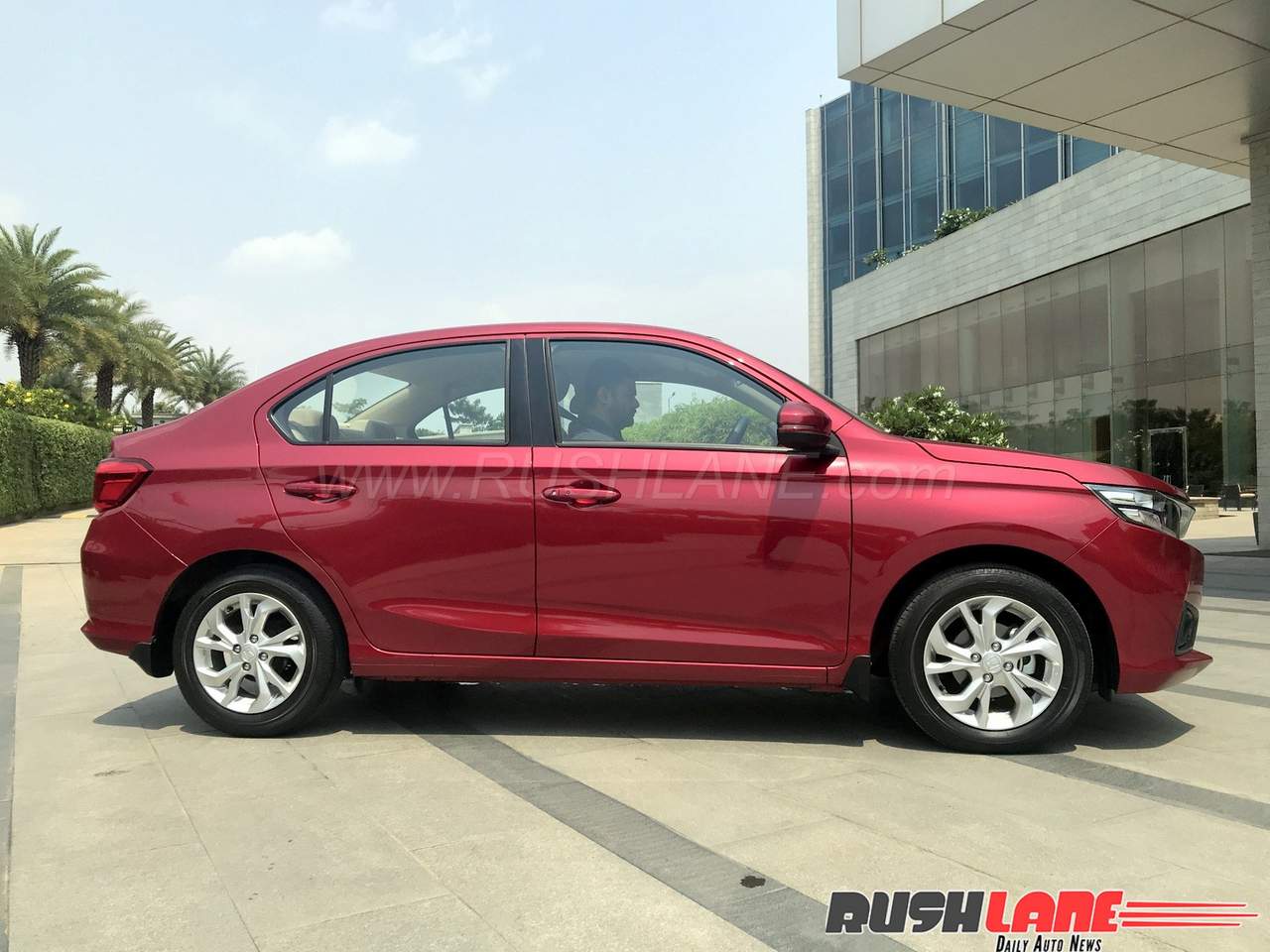 The side profile is all about some crisp lines and neat surfaces. The car is a lot more proportionate than the outgoing version, which is mostly a result of the boot not being an afterthought. The top-end variants get very stylish 15-inch alloys, which make the car look even more premium.

The rear-end compliments the front-end in terms of design. Here, again, the bumper is rather chunky and gives a sporty touch to the car’s posterior. And in a way, the car does look like the new Civic, or rather a mini Civic. 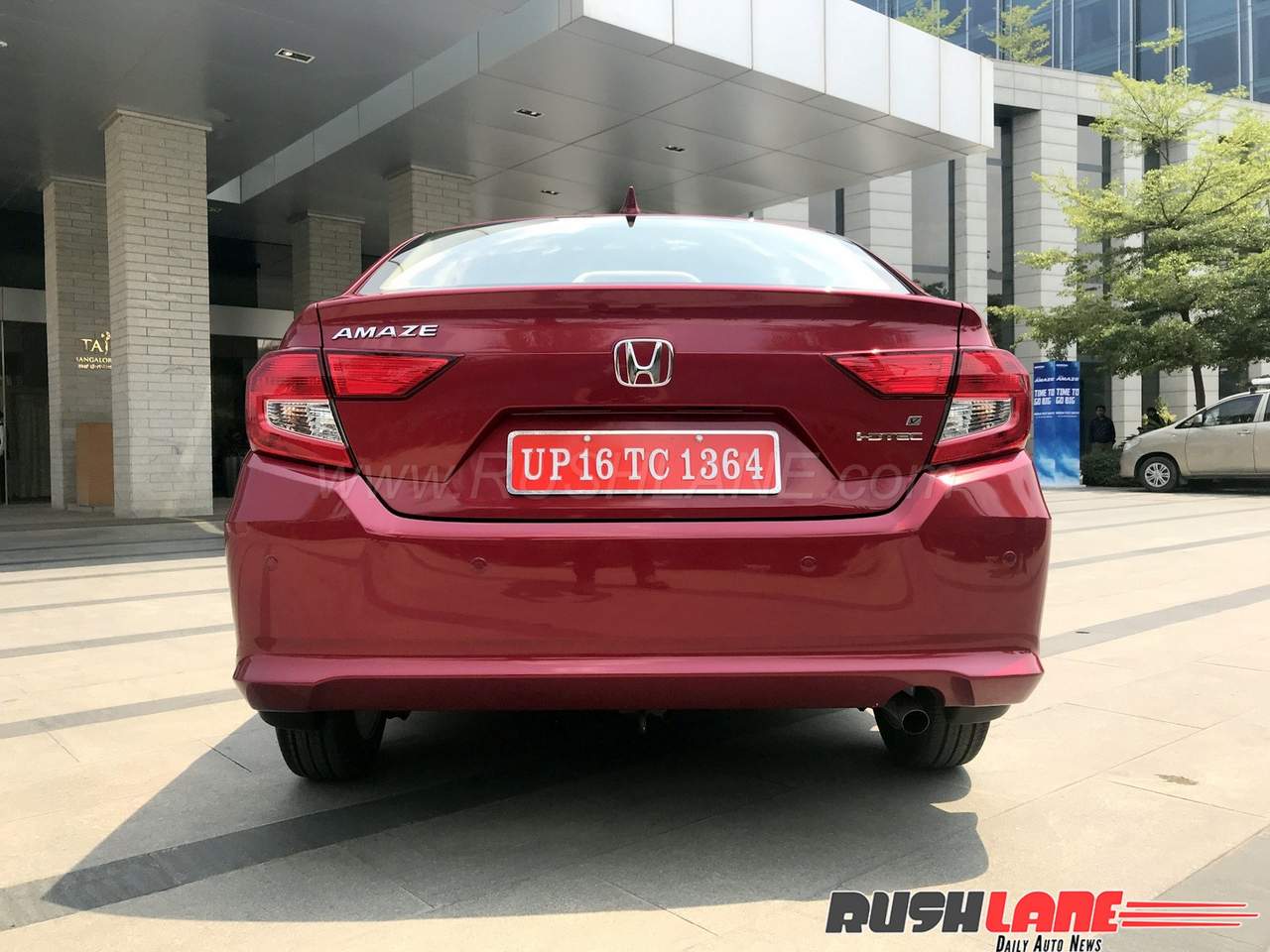 The new Amaze is dimensionally bigger than the outgoing version. At 3,995 mm, it’s 5 mm longer than the car it’s about to replace. Also, with an overall width of 1695 mm, the car is also 15 mm wider than its predecessor. The wheelbase, at 2,470 mm, is 65 mm longer than before. However, the height has reduced by 5mm to 1500mm. 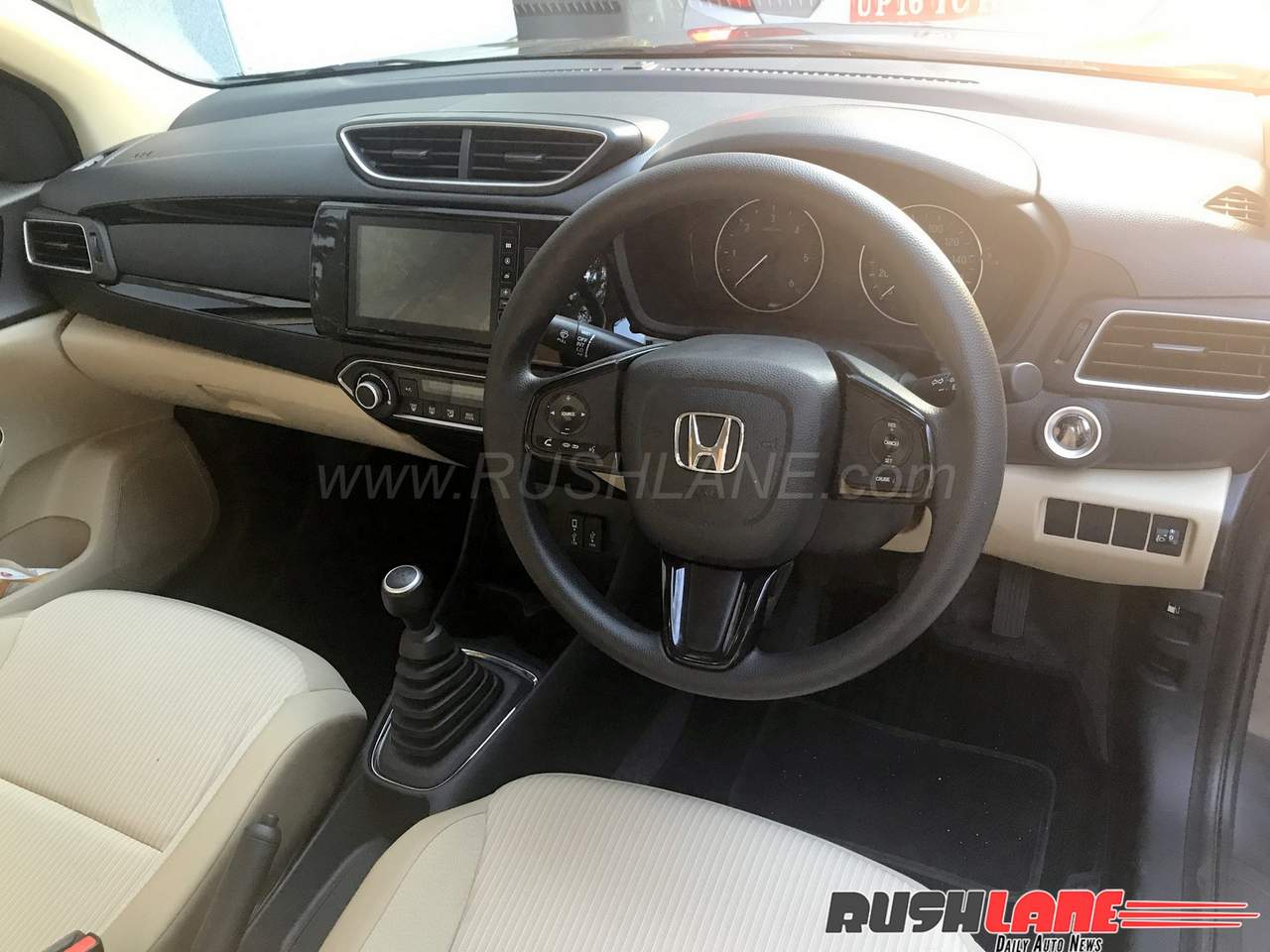 Much like the exterior, even the interior of the new Amaze is all-new and looks nothing like what the first-gen Amaze offers. You get a two-tone cabin that looks very upmarket. The steering wheel is new and gets a sporty three-spoke design. The dashboard looks like it belongs to some pricier car. The larger dimensions have resulted in a more spacious interior. You get 25 mm of additional legroom at the rear. Even the shoulder room for the rear seat occupants has improved by 45 mm, while the headroom has improved by 10 mm. The boot space, at 420-litres, is 20-litres more than what the last-gen car offers. 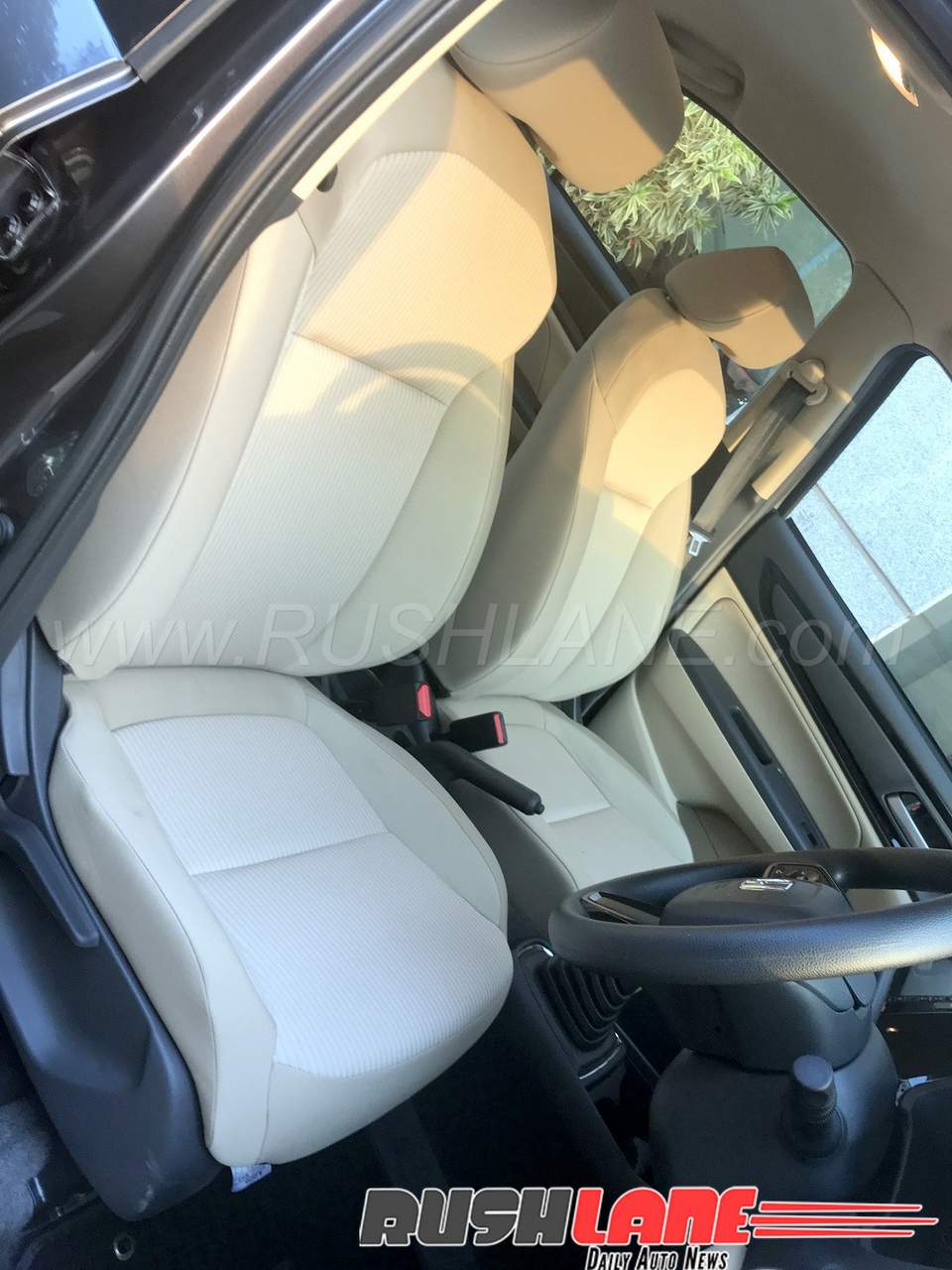 The new Honda Amaze will go on sale in four trims – E, S, V and VX. The top-end trim gets many upmarket features like a 7-inch Digipad 2.0 touchscreen infotainment system. This is basically a more sophisticated version of the Digipad infotainment unit found on the WR-V, City, and BR-V. 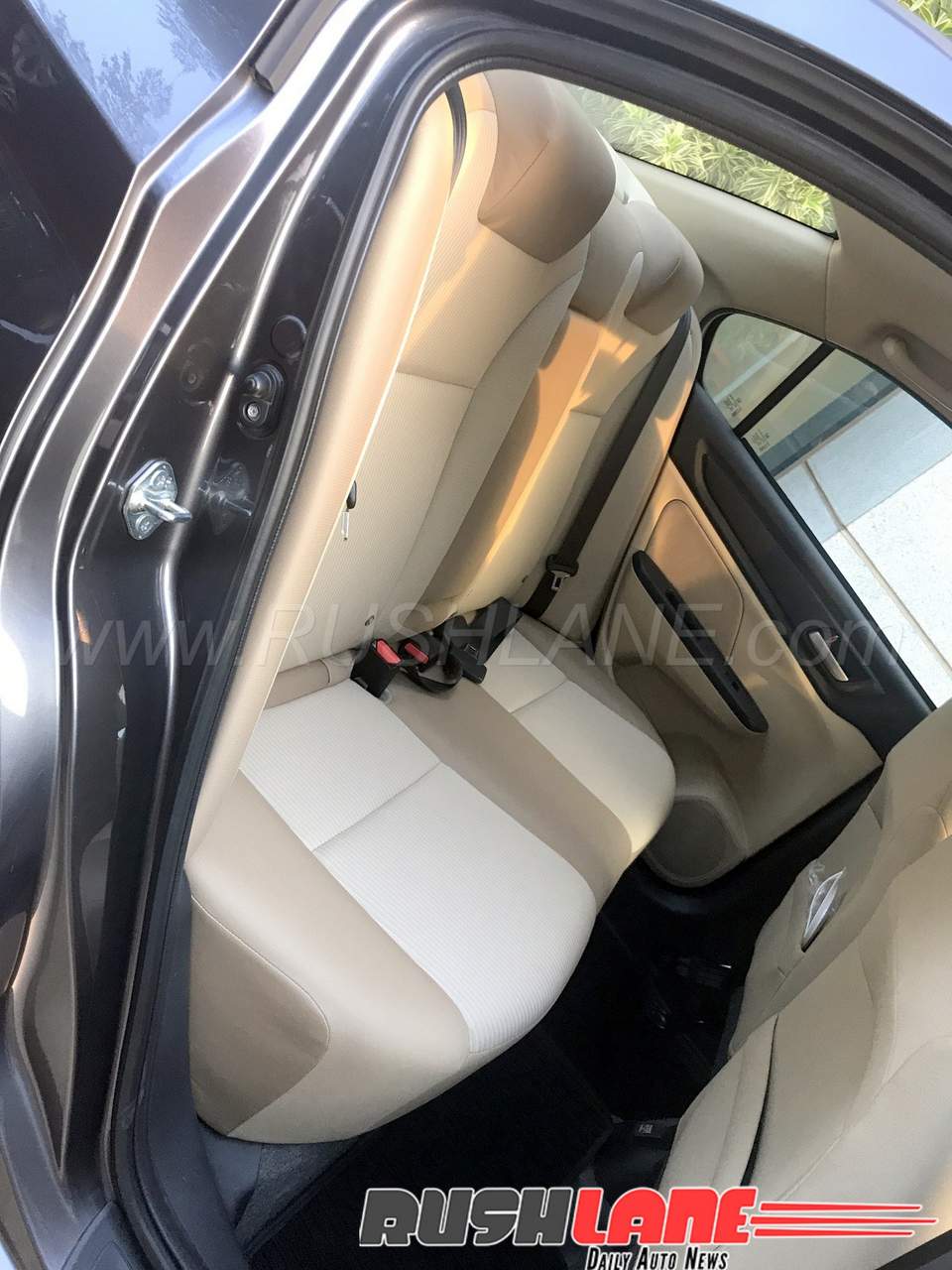 The top end VX variant will also offer Apple CarPlay and Android Auto connectivity, which will be a first for any Honda car in India. The car will also offer WiFi connectivity through its infotainment unit. The steering wheel gets audio control and you also get cruise control on the top-end trim. Other than this, you get features like an automatic climate control, rear parking sensors with camera, and keyless entry with touch sensors. 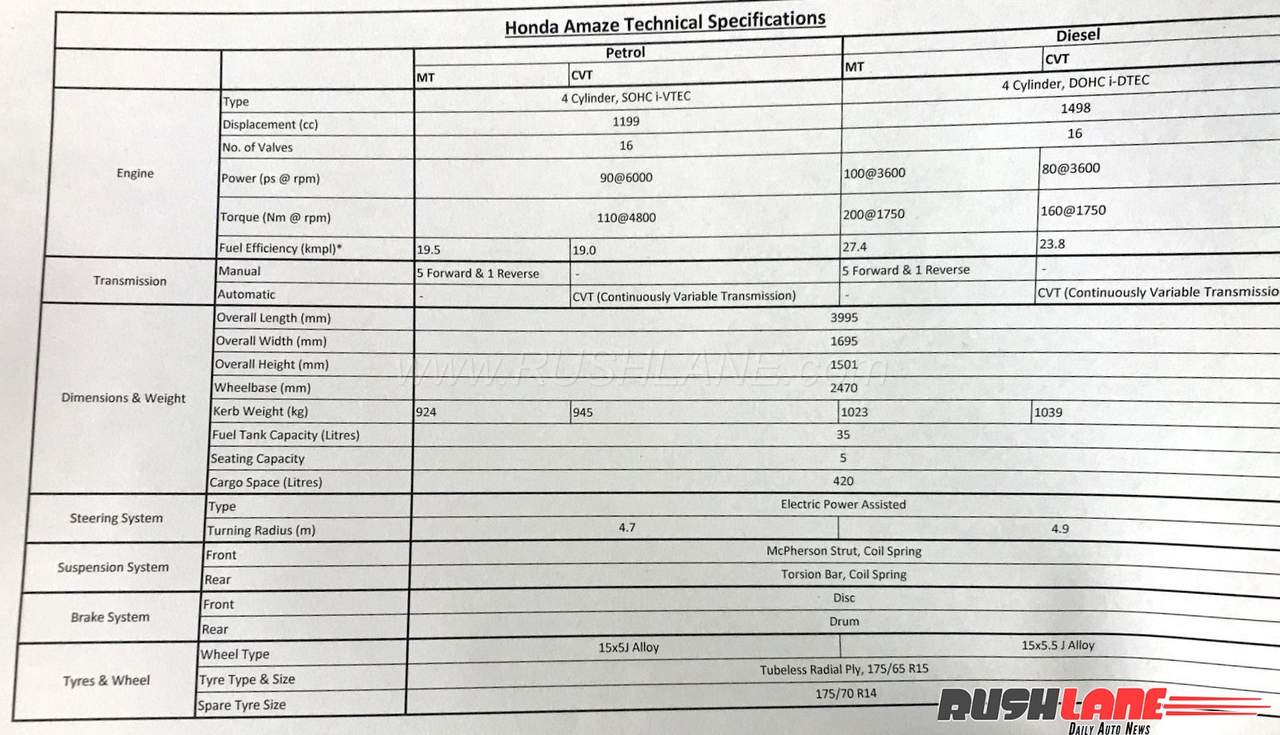 Powering the new-gen Honda Amaze is the same set of engines that power the first-gen model. However, the new Amaze gets a CVT automatic transmission for all its variants. The petrol variants are powered by a 1.2-litre, four-cylinder, naturally-aspired iVTEC petrol engine that produces 90 PS and 110 Nm. The 1.5-litre, four-cylinder, turbocharged iDTEC diesel continues to output 100 PS and 200 Nm for the manual transmission variant. Interestingly, the motor has been de-tuned to produce only 80 PS and 160 Nm for the CVT automatic-equipped variant. The new Amaze is built on a lighter chassis, which has helped Honda shave off 17 kgs from the petrol variant and 23 kgs from the diesel version. 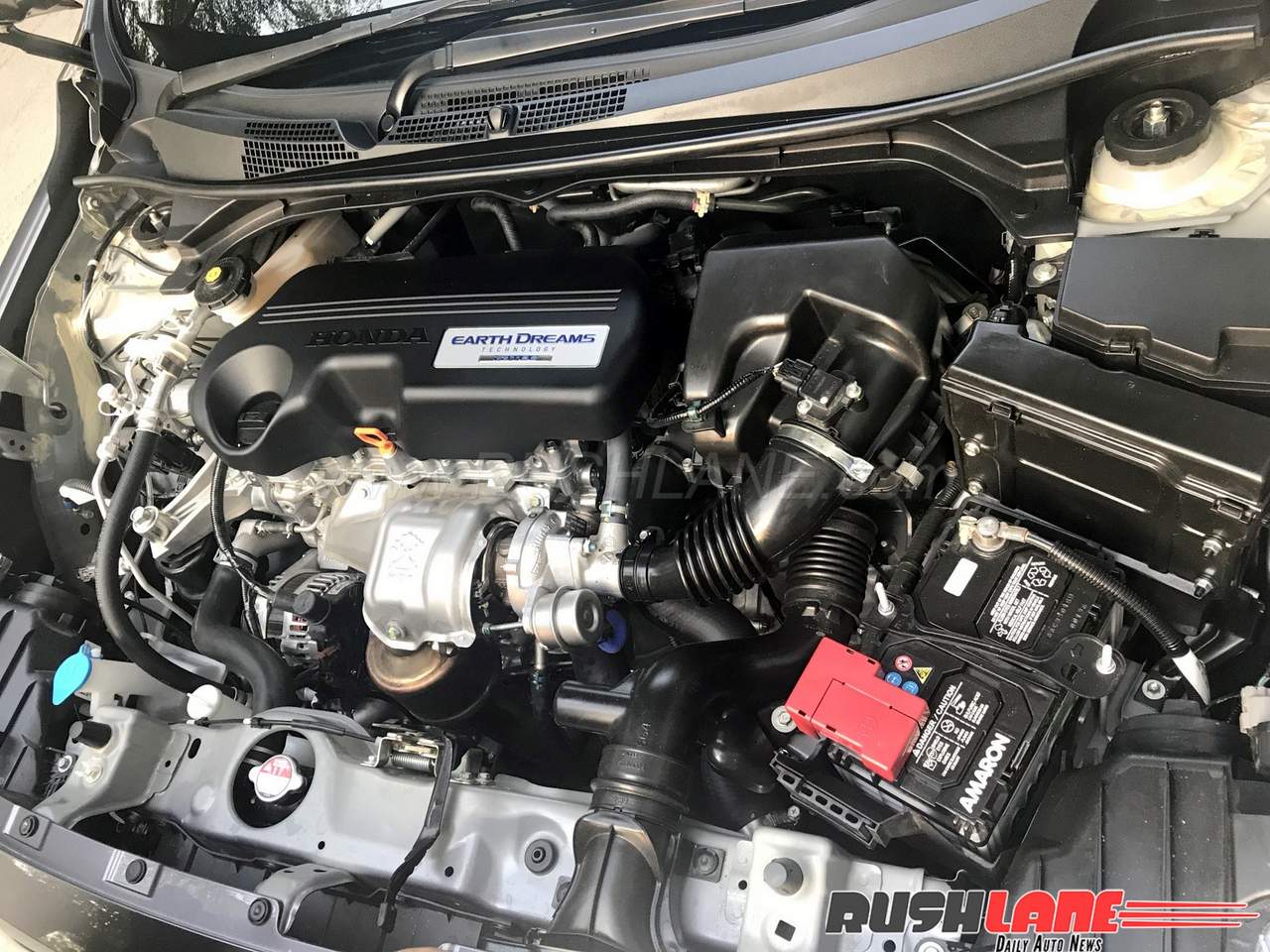 The last-gen Amaze has received a lot of flak for the high NVH on the diesel variant. This time around, the company has worked extensively on reducing the diesel engine clatter by updating the design of the pistons, cylinder blocks, oil pumps and chain systems. Also, there’s more sound insulation to make the cabin better insulated from the diesel clatter and vibrations. 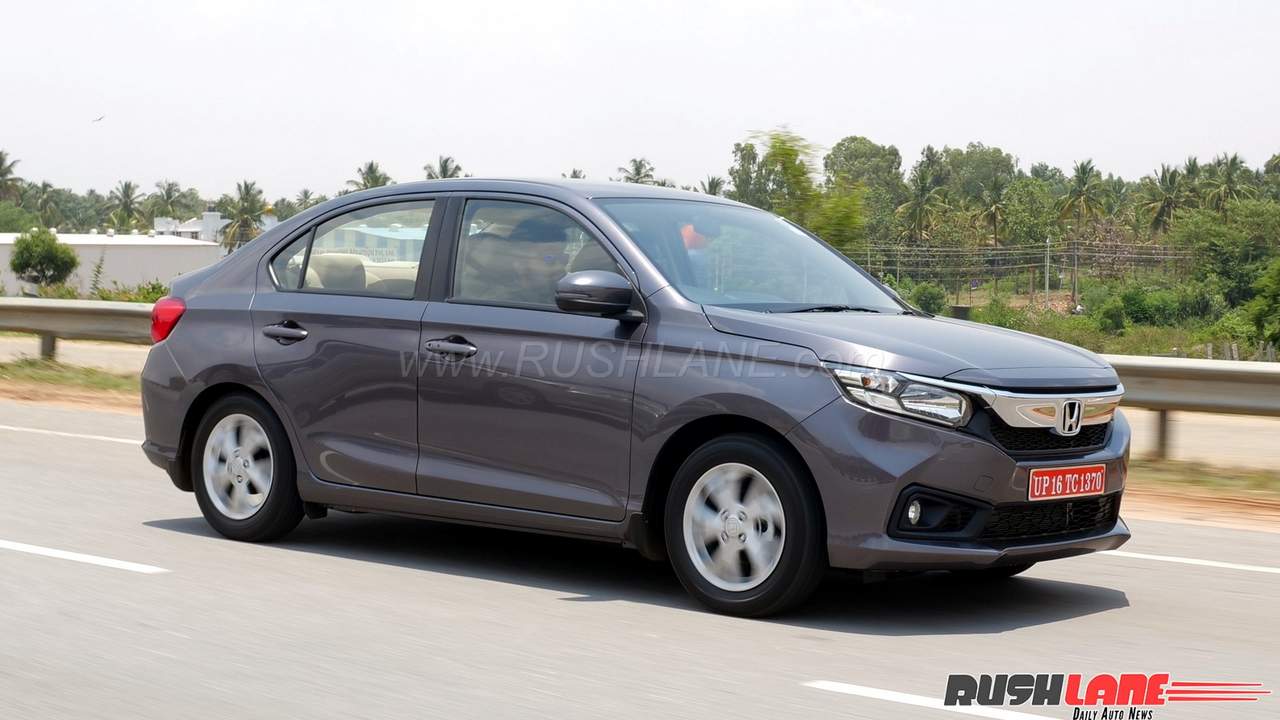 Thanks to new chassis, longer wheelbase and retuned engine, driving dynamics of the new Amaze have completely changed. Both engine options are much more responsive than before. CVT option is good enough for daily driving in the city, while it also offers relaxed cruising experience on the highway. CVT option comes with Sport mode as well.

CVT does the job well, and is a much needed option in this segment. Diesel CVT variant, though it offers 20 PS and 40 Nm lesser than the manual variant, it is still good enough and feels a lot powerful than many cars in the segment. 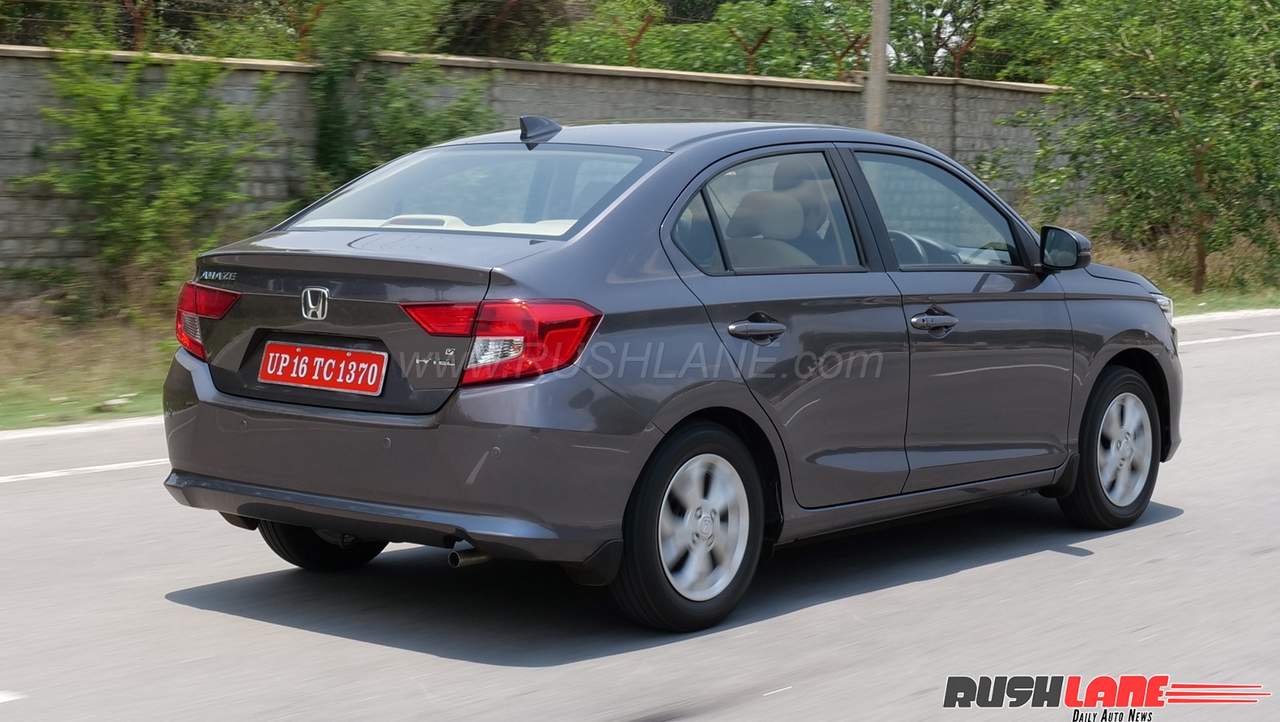 Manual diesel is the variant you should opt if you are a fan of enthusiastic driving. It accelerates well, shifts easily and is good at handling. The diesel engine can cruise in the range of 90-100 kmph with the rpm mark just around 2000. Petrol engine is a rev happy machine, and is best in the mid and top range.

Steering feedback could have been better. New Amaze gets front disc brakes and rear drum brakes. Though the car lacks initial bite, it does offer a good stopping power once you press the brakes hard. Suspension setup is just brilliant. No matter where you are seated in the car, you would be comfortable even while you are going through bad roads. 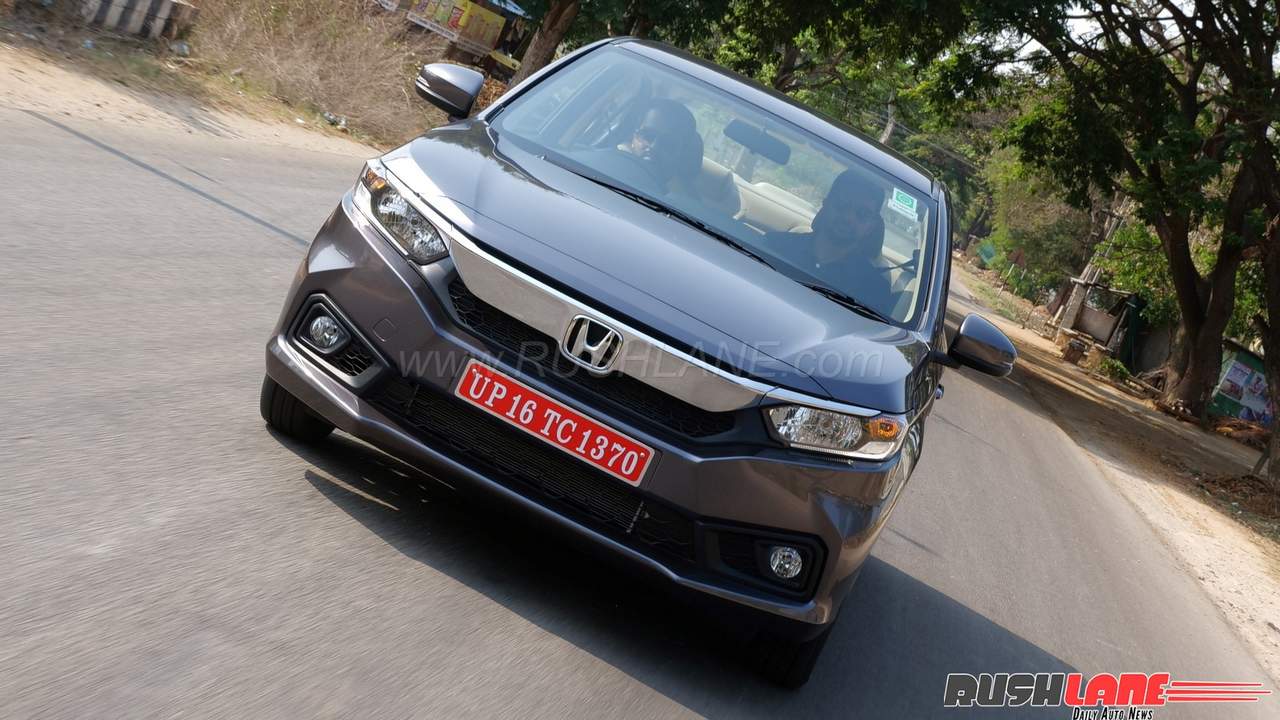 The new Honda Amaze is also much safer than the car it is about to replace. The new model features front dual airbags and ABS with EBD as standard across all its trims. The top-end variant gets a rear parking camera. Lower variants get rear sensors. Another very important factor that is likely to help Amaze further consolidate its position in the entry-level sedan segment is the lower cost of maintenance. The new Amaze will come with a 3-year, unlimited kilometres warranty that can be extended to the fourth or fifth year by paying extra. Also, Honda will offer annual maintenance packages for Rs 3,500 per year for the petrol variant and Rs 4,900 per year for the diesel variant. Also, even the new-gen Amaze will have a service interval of 1 year or 10,000km. All this will surely make the Amaze pretty easy to maintain. 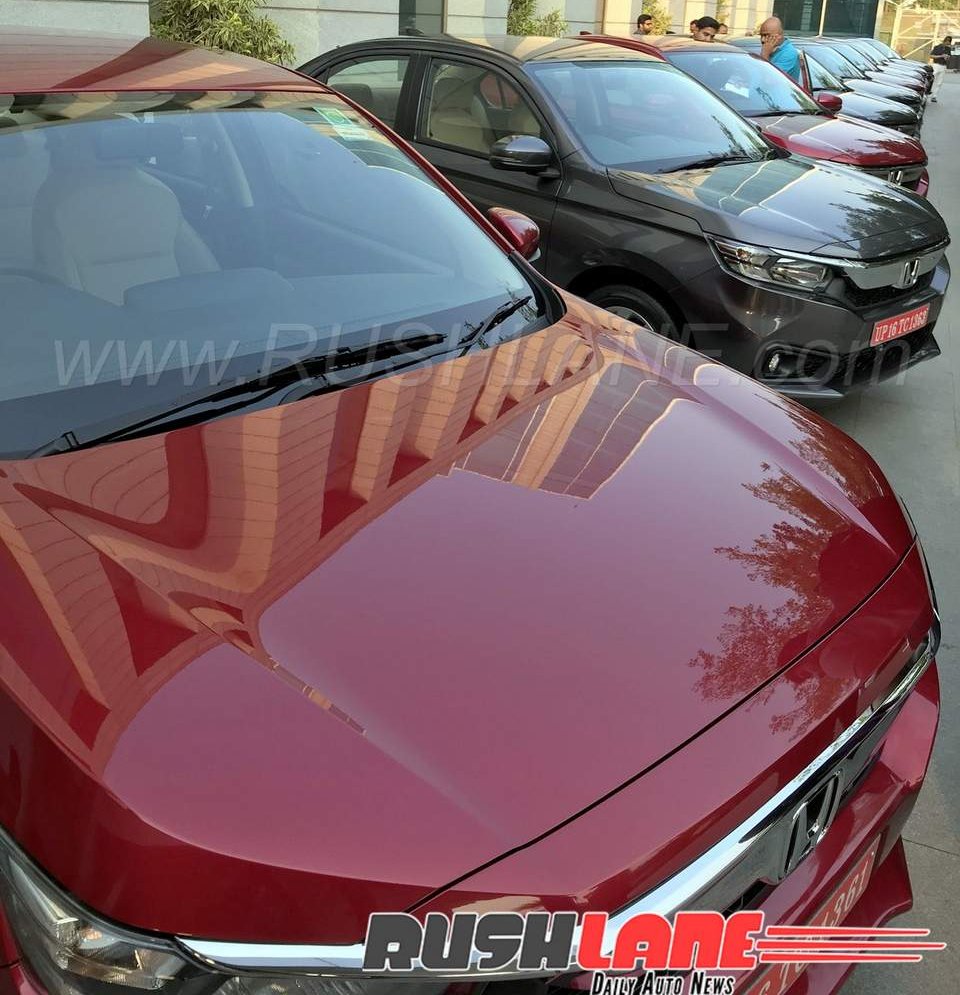 Not only the 2018 Honda Amaze is an improvement over its older version, but is a serious contender for the title of best in segment. The new generation Amaze comes with improved exteriors, spacious interiors, more features on the inside, better safety, fuel efficient engines, CVT gearbox, impressive ride quality and good driving dynamics. Honda is hoping that the new Amaze will help them chart new sales records. We are not sure what is going to stop them from achieving that.