Honda Amaze, the brand’s bestselling car, scores high on the list of 10 selling passenger vehicles. It is this Amaze sedan that contributes nearly 50% of total sales of Honda Cars India. The company sold 38,716 units of the Honda Amaze during the period May to August 2018 making it the best selling new model in the company history in the country.

Now the Honda Amaze has reached new heights. Its adventure seeking owner has taken the Amaze sedan to the treacherous Spiti Valley where road conditions are a complete nightmare. This is a brand new Honda Amaze, which was just registered on 4th Sep 2018. Within a week of taking delivery, the car was in Spiti Valley. 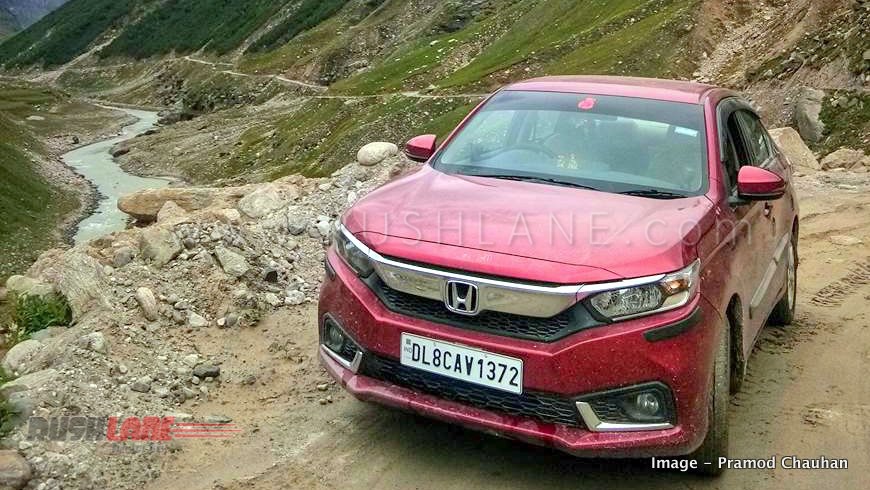 The road, if one may call it a road, sees mud, slush, dirt trails, water crossings, boulders and large stone while it is falling boulders and narrow steep climbs that Spiti is also notorious for. A road of this sort not only requires an able vehicle but also a highly competent driver.

The accompanying photos show off this red colored Honda Amaze against the stark arid contrasting Spiti Valley. The driver was able to not only access Spiti Valley but also crossed the Kunzum Pass thanks to the abilities of the new Honda Amaze coupled with its high ground clearance of 170mm.

The all new Honda Amaze, India’s second best selling sedan after the Maruti DZire sells nearly 10,000 units each month. It is offered in a list of variants and in both petrol and diesel engine options.

Honda Amaze is priced from Rs 5.81 lakhs to Rs 9.10 lakhs in India. It gets a host of new safety features and a more rugged stance as compared to the outgoing model. Interiors sport a new layout, more driver and passenger comforts and a new DigiPad 2.0 infotainment system. The 2018 Honda Amaze will continue to compete with the Maruti DZire and Hyundai Xcent in its segment.