The all new 2018 Honda Brio is on display at the ongoing 2018 Gaikindo Indonesia International Auto Show (GIIAS). The new Honda Brio borrows some design elements from Honda Amaze which made its debut in India earlier this year.

New Honda Brio is being showcased in two variants – the standard Brio Satya (standard) and sportier Brio RS. It features a much sportier design as compared to the first generation Brio. Thanks to the new platform, the car is also bigger in size than before, offering much more interior legroom and headroom to passengers. 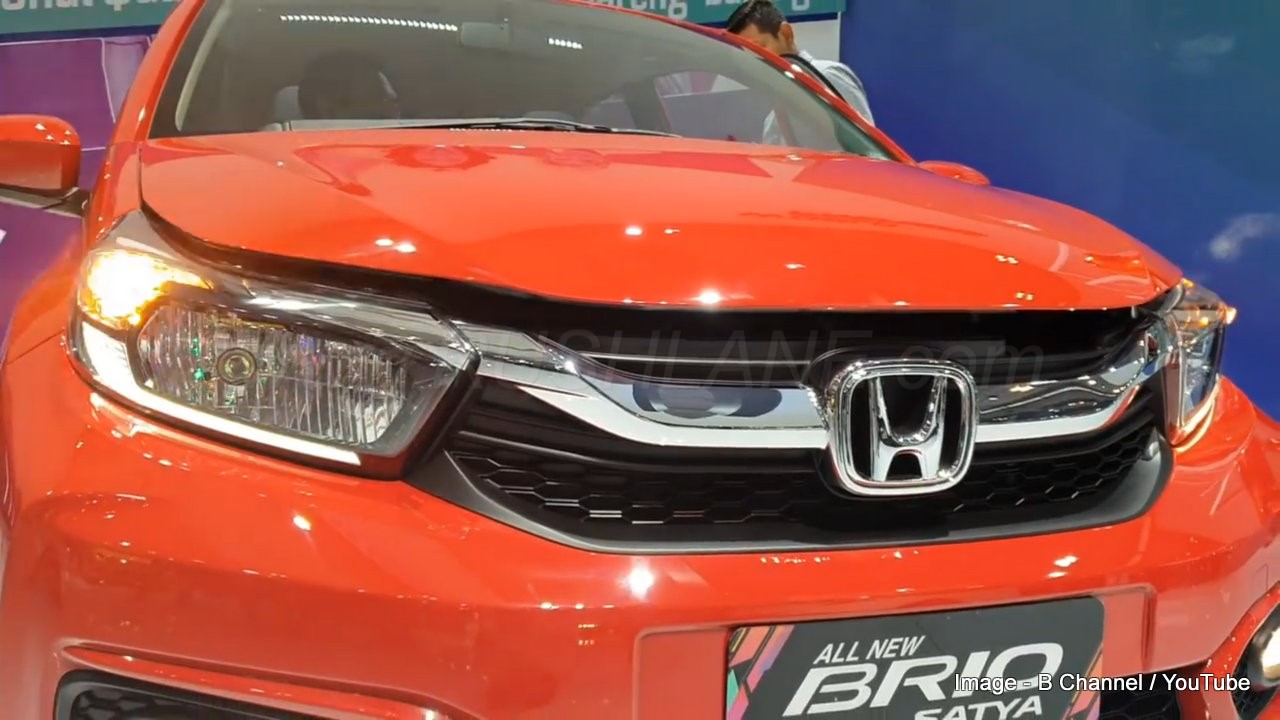 Highlights on the outside include new larger rectangular shaped headlamps, side skirts, hood scoop with LED strips on air intakes, new front and rear bumper. What is similar to the old Brio – front doors and the distinct crease lines on the sides, ORVMs and black plastic on it’s a Pillars. It also receives a large roof spoiler and alloy wheels while the chunky chrome bar in the front sports the Honda logo.

Sharing the same lightweight platform with the Honda Amaze, the Brio will measure 3,610mm in length, 1,680mm in width and 1,500mm in height. It will sit on a 2,345mm long wheelbase while kerb weight will be at 920 kgs, a decrease of around 30-40 kgs as compared to its current counterpart. Honda says that the decrease in weight is due to use of lighter platform. Though lighter, it is still stronger than before. Watch the detailed walkaround video below by B Channel.

On the standard Brio, you will get a dual tone interior. The dashboard will not feature a touchscreen infotainment system like seen on the Amaze – that is only for the topend Brio RS variant. Seats are same as new Amaze – offering much better cushion and comfort.

Engine options on offer is a 1.2 liter i-VTEC petrol engine. This engine is naturally aspirated, 4 cylinder engine capable of 90 PS power at 6,000 rpm and 110 Nm torque at 4,800 rpm mated to a 5 speed manual transmission or CVT.

No prices have been announced yet. Expect the new Brio to be priced between Rs 4.5-7 lakhs when launched in India sometime next year. Here, it will compete with the likes of Maruti Swift, Hyundai Grand i10, Tata Tiago. Below is the image gallery of new Honda Brio.