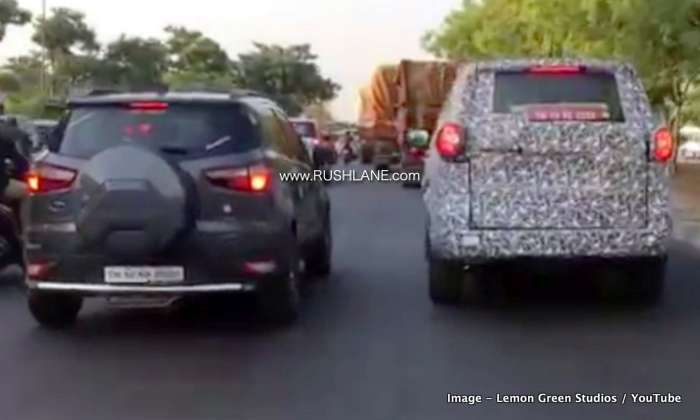 Since it debut in 2002, the Mahindra Scorpio has been retaining its core design character even though things under the skin changed significantly. However, the fourth iteration which is due for 2020 is about to shake things up as evident from these new set of spy shots.

A camouflaged test mule of the 2020 Mahindra Scorpio has been spotted testing on public roads once again. A quick glance is all you need to know that the next-gen Scorpio is going to be quite different from the current version which is an evolution of its successor.

The new SUV looks longer, less boxy and adopts completely new front and rear fascias. Underneath the camouflage, the 2020 Scorpio appears to be wearing production-ready body panels. The headlamps and grille are much larger than before while the rear gets redesigned taillights and a slightly tapered tailgate. Below is the video, credit to YouTube channel Lemon Green Studios.

While the camouflage keeps the finer details of the profile under wraps, we can see that the greenhouse is generous and that should make the interior airy. The new gen model also features a good amount of ground clearance. We can expect the popular UV to offer brand new dashboard with improved quality, a touchscreen infotainment system with latest connectivity features, and improved space.

The new Mahindra Scorpio is expected to receive a heavily updated ladder frame chassis to comply with the upcoming crash test norms. Thanks to its hardware, the Scorpio would retain its inherent capability for off-roading.

The 2.2-liter mHawk turbodiesel engine of the current model is expected to be phased out in favour of a 2.0-liter unit (to be shared with the new XUV500) which will be compliant with BS-VI emission norms. Expect the downsized oil burner to offer more power and torque than the 2.2-liter mill. Both manual and automatic transmissions are expected to be on offer.

The new Mahindra Scorpio would play a crucial role in helping the automaker strengthen its presence in the SUV-loving Indian market. The four-gen UV which is being developed by Mahindra with inputs from its North American technical center is expected to make its world debut towards the end of this year or early next year. We expect it to hit the showrooms before April 1, 2020.