Mahindra which once used to command over 50% market share in the UV space had slid down to the second spot, thanks to the onslaught of soft-roaders like Maruti Brezza, Tata Nexon and Hyundai Creta. None of Mahindra’s products in the sub-4 metre compact SUV space (e.g. TUV300, Quanto, Nuvosport etc.) could deliver the numbers which were expected out of them.

To address the situation, Mahindra had called in help from its South Korean subsidiary, Ssangyong to bring in an Indianized version of its globally successful Tivoli (project name: S201, rumoured name XUV300). Now, latest update suggests that Mahindra intends to leave no stone unturned and plans to rake in sizeable numbers through the S201 by providing some class premium features & performance figures. Below is an exclusive digital rendering created by Pratyush Rout of the upcoming Mahindra XUV300. 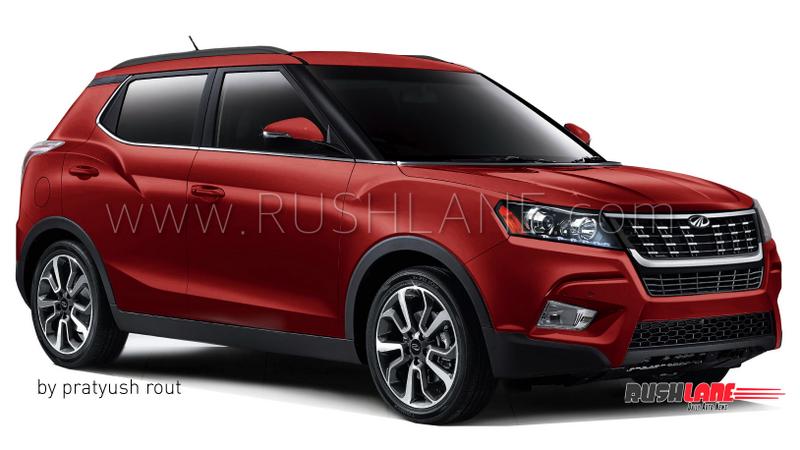 Mahindra XUV300 will mostly be powered by the same 1.5 litre diesel motor which was seen on the Marazzo. If Mahindra doesn’t change the output (123hp/300Nm), it would be providing class leading power and torque numbers compared to Vitara Brezza which runs on a 1.3 litre motor producing 90hp/200Nm and Nexon which is powered by a 1.5 litre diesel unit churning out 100hp & 205Nm of torque.

Sources suggest that the top-end S201 will mostly get 17-inch alloy wheels, while its closest competitors, the Brezza and Nexon come packed with 16-inch alloys only. The addition of a panoramic sunroof could be another trump card which Mahindra might use against the current segment leaders. Currently, it is just the Ford EcoSport which comes with 17-inch alloys (Signature & S variants) and a panoramic sunroof (top-end grades).

It is also confirmed that XUV300 will feature a 2-zone climate control system, which will again be segment-first feature. Additionally, it is expected that the compact SUV from Mahindra will get 7 air-bags, ABS, ESP, LED headlamps and LED DRLs.

The S201 is most likely to be launched by end of 2018, post the launch of XUV700 (next-gen Ssangyong Rexton) which is also due for a launch around the upcoming festive season. Expect launch price to be in the range of Rs 7-10 lakhs.