Maruti Suzuki India Limited, the leading car maker in the country, is currently testing their new Ciaz, which is due for launch in a few weeks. Bookings open by end of July with official launch pegged for the first week of August.

Set to compete against the Hyundai Verna and Honda City, Maruti Suzuki Ciaz facelift will come in with a new 1.5 liter petrol engine option. This ‘K15B’ petrol engine is a new four cylinder 1,462cc engine that offers 104 bhp power and 139 Nm torque. Once ready, it will replace the current 1.4 liter ‘K14B’ engine producing 91.2 bhp power and 130 Nm torque mated to a 5 speed manual gearbox.

Maruti Ciaz with the new petrol 1.5 liter engine will also be the first car to boast of SHVS mild hybrid technology. With added power and torque, the new ‘K15B’ will allow Ciaz to be more aggressive and attract more customers in the petrol sedan segment. This new 1.5 liter petrol engine is also expected to make its way into the new Ertiga set for launch later this year.

As for the diesel engine, it was also set to be replaced with all new 1.5 liter mill. But, as per latest report by Times of India, they claim that the engine will not launch with Ciaz. It is not yet clear as to why the plans have been changed, but it could be that the testing is yet to complete. For now, the Ciaz diesel facelift will continue with the same Fiat sourced 1.3 liter mill, which is already being offered today. The new engine option is expected to make debut at a later date. 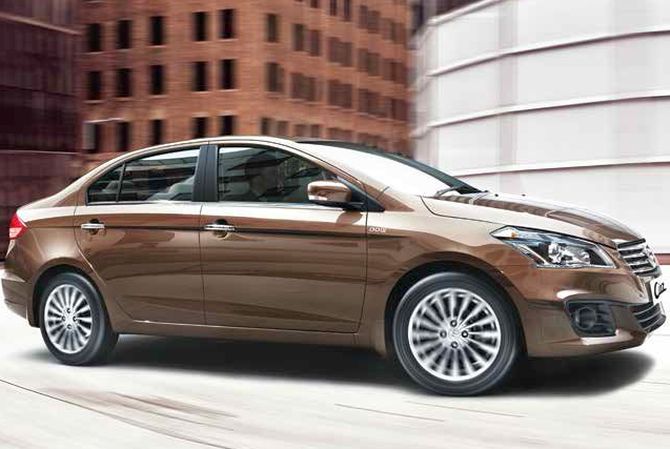 Maruti Ciaz facelift will receive exterior and interior updates putting it on par with luxury vehicles thus setting a new benchmark in the premium sedan segment. It will get new front and rear bumpers, re-profiled head and tail lamps and LED elements.

Interiors will see some tweaks on dashboard and new colors of seat fabric. A sunroof may also be added on higher end variants allowing it to compete against Honda City, Hyundai Verna, Volkswagen Vento, Nissan Sunny and Skoda Rapid.