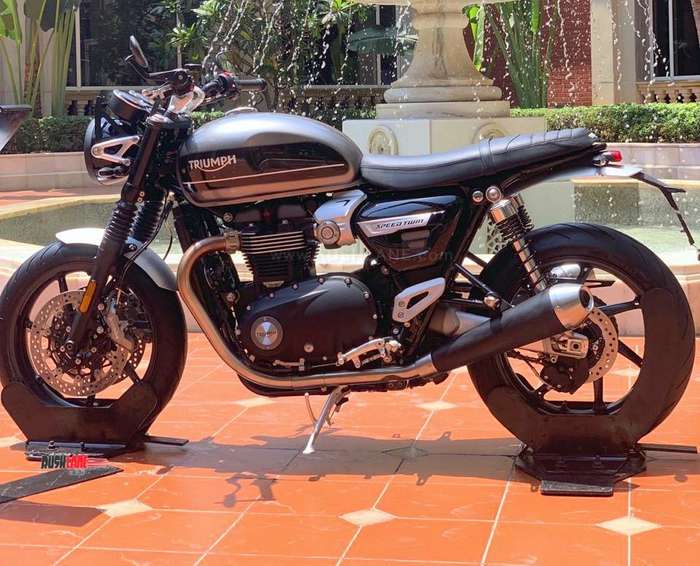 Triumph India has launched the all new Speed Twin today, growing the company’s portfolio even further. It is a modern classic roadster, which boasts of advanced technology and best in class handling. Bookings are already open at company dealerships across India. Price starts from Rs 9.46 lakhs, ex-sh; with deliveries promised by the end of this month or from early May.

It may be remembered that the Speed Twin was initially introduced in 1938. It was the first to receive a parallel twin engine and was known as the world’s first Rider’s Bike. Production was stopped in 1966, and now in 2019, the Speed Twin once again comes in, but with new styling and as a modern custom roadster.

On board feature include ride by wire, torque assisted clutch with three riding modes of Road, Sport and Rain, LED DRLs, LED rear lamp and LED indicators. There is also ABS which is offered as standard along with switchable traction control. It also gets a USB charging socket, twin pod instrument console with digital readouts will also be a part of its features.

2019 Triumph Speed Twin is positioned on the same frame as the Thruxton. It is 2.5 kgs lighter than the Thruxton due to extensive use of magnesium cam covers and new clutch assembly. It is powered by the same 1200cc parallel twin engine seen powering both the Thruxton and Bonneville T120 offering 96 bhp power at 6,750 rpm and 112 Nm torque at 4,950 rpm mated to a 6 speed manual gearbox.

Suspension is via 41mm non adjustable cartridge telescopic forks in the front and twin shock set up with pre load adjustment at the rear. Its braking power is via 305mm dual discs with 4 piston Brembo calipers in the front and 220mm single disc at the rear. Triumph Speed Twin sits on 17”, 7 spoke alloy wheels fitted with Pirelli Rosso Corsa III tyres.

Triumph Motorcycles had announced launch of 6 bikes in India this year. The Street Twin, Street Scrambler, Tiger 800 XCa and Speed Twin have already been launched. It will be followed by launch of the Scrambler 1200 XC and the Bonneville T120s later this year.