Nissan Magnite is currently the talk of the town and everyone is anticipating the launch of the next sub-compact SUV in India. The segment itself has been on rage in the country for a few years now and the Magnite did manage to create a strong first impression on its official unveil last month.

With loads of features and a comfortable and spacious cabin, Magnite is touted to be one of the most value for money propositions in its segment. The latest images of its base XE variant suggest the same. These images plus the brochure leaked and details divulged by the Japanese brand previously indicate that the base variant comes with a decent amount of goodies.

Going by the images, there are a considerable number of absentees from the fully-loaded spec showcased at the time of its unveiling. Still, it looks far from being barebones as it comes with a similar front fascia with an identical mesh grille. Hat tip to automotive enthusiast Vishnu for sharing the images and video.

The headlight cluster remains same, however, the base variant gets halogen units as opposed to LED bi-projector units in the top-spec model. The L-shaped DRL is also empty and space is left a void with a glass panel. Nissan Magnite XE base manual variant is expected to be priced from Rs 5.33 lakhs, ex-sh.

At rear, unlike higher specced trims, the base trim gets a single-tone bumper with same reflectors and split taillights. Another notable difference is the absence of a shark-fin antenna and the base variant of Magnite makes do with a conventional cord antenna. A rear window wiper and defogger are also present on its base variant. The sport roof-rails are functional which can carry a load of up to 50 kg and are offered as standard across all variants. 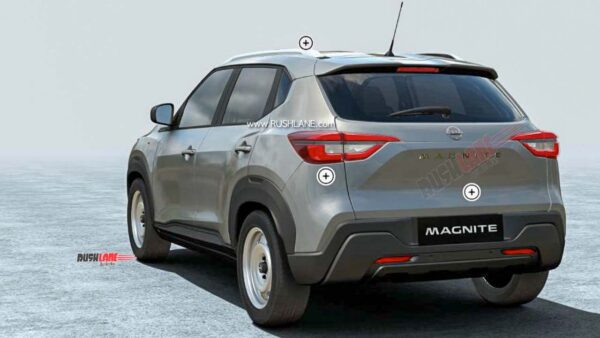 The biggest difference is the use of 16-inch steel rim wheels instead of dual-tone diamond-cut alloys as in higher variants. Also, the door handles are body-coloured and not embellished with chrome. Even the wing mirrors are blacked-out instead of body-coloured and do not come with integrated turn indicators. However, it still receives blacked-out pillars just like the higher time levels.

Going inside the cabin, one can notice subtle differences. It gets a black fabric upholstery with a light grey fabric accent. The dashboard also sports a dual-tone theme with a silver-gray scheme complemented by the black elements.

The most noticeable absence is the floating 8-inch touchscreen infotainment system. It receives a 3.5-inch digital instrument cluster but misses out on the 7-inch advanced MID system in the driver’s console.

As you can see, for a base variant it is fairly well kitted and after-market accessories can surely enhance up its beauty. As we already know, Nissan Magnite will be offered in two petrol engine options- a 1.0-litre B4D dual-VVT naturally aspirated unit and a 1.0-litre HRA0 turbocharged unit. Transmission options include a 5-speed manual as standard along with a CVT as an option for the turbocharged unit.

Nissan Magnite is expected to hit showrooms towards the end of this year after its official launch which is expected later this month. It is speculated to be the most affordable subcompact SUV till date and is expected to be priced in between Rs 5.5 – Rs 8 lakh (ex-showroom). It will compete against a long list of rivals including Tata Nexon, Kia Sonet and Hyundai Venue.