One Electric KRIDN motorcycle launch next month – Rival to Revolt

With the electric mobility revolution kicked in and raging hot in the automotive industry, people should be ready to embrace more electric vehicles (EV) in the coming future. This includes both cars and two-wheelers. Even though India has been lagging behind in the EV segment, with multiple established auto brands and electric start-ups joining hands, it must not be too long before the market is ready to adopt EVs wholeheartedly.

One Electric Motorcycles, one of the many new electric start-ups, has announced the launch of its first electric motorcycle named ‘KRIDN’. The company has stated that it has completed the on-road trials and homologation process of their Made in India electric bike. The deliveries will begin next month covering four cities for the initial launch.

One can apply for dealership registration and pre-booking vehicle registration absolutely free of cost. The company has opened applications for four cities- Delhi- NCR, Bengaluru, Hyderabad and Chennai.

KRIDN electric motorcycle has been priced tentatively at Rs 1.29 lakh (ex-showroom). The bike’s powertrain details are yet unknown but it can attain a maximum speed of 95 kmph thanks to a peak torque of 165 Nm. thanks to that enormous torque it can breach 0-60 kmph in just 8 seconds. The total range at a single charge is claimed to be 110km with a battery recharging time of 4-5 hours.

The motorcycle gets wide tyres from CEAT, lighting from FIEM Industries and suspension setup from Munjal Showa. The chassis has been developed by the company’s in-house designing team. The company claims that the spare parts of the bike will be easily available. 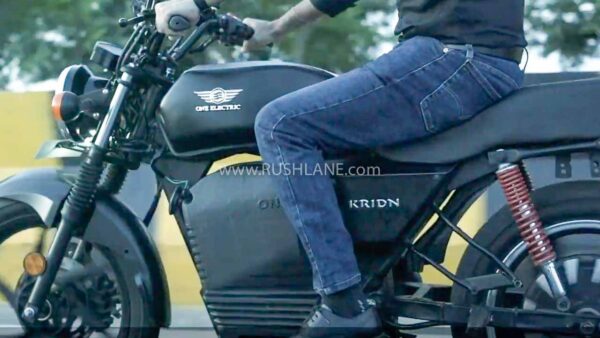 One Electric Motorcycles’ CEO, Gaurav Uppal, further revealed that the startup is also developing an entry-level electric motorcycle with a 2kW motor which can attain a maximum speed of 75 kmph. This model will cater to the last mile deliveries and bike taxi services. The said model, called KRIDN R, will be priced below Rs 1 lakh.

Speaking briefly about the design, the bike has no flashy components and looks neat with its simple looks. Even though it claims to have a strong performance it looks like an everyday commuter. The battery pack and motor are IP protected which blend in quite nicely with the design of the bike. However, the logo in the tank is found to have an uncanny similarity with one of the ‘Royal’ motorcycle brands.

While One Electric Motorcycles claims KRIDN to be the fastest electric bike in India, other yet to be launched products like Emflux One and Ultraviolette F77 also claim the same. It will be interesting to see which one is actually the quickest.