Only ISI helmets are legal others will be fined – Traffic police

From 1st September 2019, the Motor Vehicle Amendment Act 2009, which contains 63 provisions that deal with penalties, licenses and registrations, came into force. The new regulation enhances penalties several fold in a bid to bring in some law and order into our unruly transport system, to improve road sense and reduce mishaps.

As a part of this safety implementation, the Bengaluru Traffic Police will also be cracking down on two wheeler riders who do not use helmets, and more specifically, ISI marked helmets. They will be fined heavily but initially the drive will be carried out against policemen itself as has been announced by Additional Commissioner of Police (Traffic) Mr B R Ravikanthe Gowda. 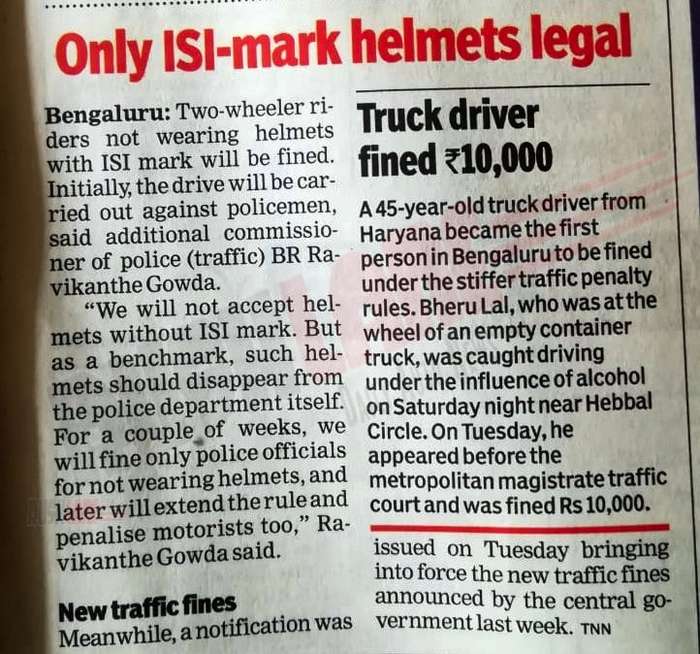 While asserting that the use of non–ISI helmets will not be accepted, he stated that first the police department itself should use helmets while riding their two wheelers and that to only ISI marked helmets.

The new notification for stricter traffic regulations as announced by the Central Government on Tuesday, already saw the first such violator caught in Bengaluru. This 45 year old truck driver from Haryana was caught in Bengaluru on Saturday night for driving under the influence of alcohol.

Bheru Lal, the truck driver was at the wheel of an empty container truck and was stopped near Hebbal Circle. He was made to appear before the Metropolitan Magistrate Traffic wherein a fine of Rs.10,000 was levied on him.

Now while many may question why ISI marked helmets are being made mandatory, it needs to be pointed out that this is being done for the safety of the wearer. The BIS Standard IS-451 sets certain standards for testing and criteria which the helmet must comply to. This standard is similar to the European Standard ECE 22.05 which is considered the best of all standards.

A close inspection of the ISI marked helmets which include Studd, Steelbird and Vega, being the three big names, they are notable different from the road side helmets. However, many two wheeler riders opt for the cheaper roadside versions putting life and limb on the line as against opting for a safer and marginally more expensive ISI marked helmet.