India has the largest railway network in the world which is spread over 1.23 lakh kms

Indian Railways is widespread with tracks laid across large tracts of the country. And while there’s momentum in recent years on wide spectrum of requirements including catering and better trains, maintaining endless miles of tracks need innovative solutions.

And that’s what one railway officer has created, a light weight railway bicycle. Pankaj Soin, Sr DEN, West Ajmer is the man behind the project. The requirement was need based considering the stretch in question is difficult to approach but that’s no excuse for a slack in maintenance. Old wheels from unserviceable rail carts were used together with an old cycle, and two lightweight iron pipes.

A wheel was positioned ahead of the cycle and attached to it, and another to the other track line. The front wheel functions for alignment, and second wheel to balance the railway bicycle. Simple nut-bolt fixtures were used to attach the fabricated bits for easy assembly, and dismantling. 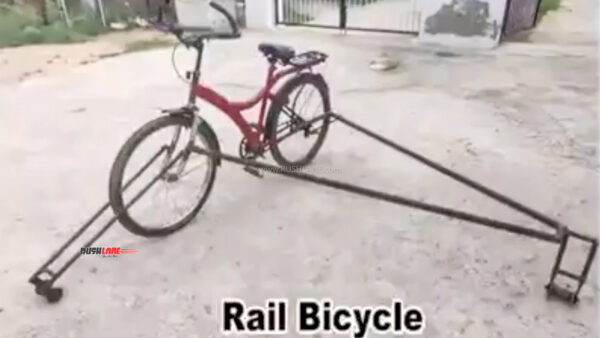 The rear, or second wheel arrangement sits on the second rail so the unit is fully balanced. In essence, it’s a cycle designed to be ridden on railway track, quite literally that. The balancing wheel is connected to the cycle by being attached the the rear cycle wheel trellis. The same is done at the front, creating what looks like a rudimentary triangular structure but which is efficient in its simplicity.

Riding the railway bicycle saves on precious time to reach a repair location as the track man can simply cycle to a required spot instead of having to walk to a repair site, or wait for a rail cart to be brought on track. It’s a faster way to assess and inspect a track before a train passes. This is especially helpful during monsoon when one needs to inspect bridge approach locations, and vulnerable locations after a heavy shower.

The assessment needs to be completed in quick time before a passenger train approaches sections of track that are identified as vulnerable, or need to be regularly checked. When a loco pilot sends out a jerk message, the track man can quickly reach said site. There’s no doubt it’s a better way to get to a checkpoint as part of routine daily checks, and for patrolling during hot Indian summers.

The lightweight cycle structure is a mere 20 kgs on scale. This makes it convenient to lift on and off tracks, and can be done by a single person. Average speed is pegged at 10 kmph, and one can speed upto 15 kmph. As with any cycle, railway cycle is capable of carrying two people while maintaining the same speed. Fabrication cost as well as acquiring an old cycle can all be done in Rs 5,000, and can easily be undertaken at a railway workshop. Tweaking and modifying the basic structure can help serve different sections of Indian Railways.

It is not clear how safe this new system is. One would argue that the repair-man will take the cycle out only on tracks that are closed. But that cycle violates the safety guidelines. TCAS (Train Collision Avoidance System) ensures all rail vehicles including the maintenance equipment is traceable at anytime. But in this case, the cycle riding repairman might not be traceable. And it is very easy for somebody to forgot there is a repairman out there on track with cycle and open the track for traffic.

There seems to be a fatal flaw in this system. Whoever uses it, is in extreme danger of being run over by train. Even if the person runs away after seeing a train, the cycle on track could cause serious damage to infrastructure and could even lead to derailment.