RE Himalayan vs KTM 390 ADV – Ride up a Hill, water crossing (Which is better?)

So, which one is better suited for adventure? Well, one may look at the specs, but that in itself may not reveal the full story. An untamed, uncensored off-road trip is likely to provide a much better idea about the capabilities of these bikes. This is exactly what YouTube channel ‘Bike World’ has revealed in one of their recent videos.

This was not exactly a race to the top, but more about enjoying the trip with the bikes and trying to identify their strengths and weaknesses. Stock variants of 390 Adventure and Himalayan were used in this expedition without any changes to components or engine performance. Only some parts such as rear view mirrors were removed, as there was no need for such equipment on this extreme off-road trip.

The bikes encountered various hurdles along the way such as wild rivers with slippery moss covered rocks, steep inclines, gravel roads, and uneven dirt tracks with knee deep water. It was an extreme environment that 390 Adventure and Himalayan were never designed to handle. 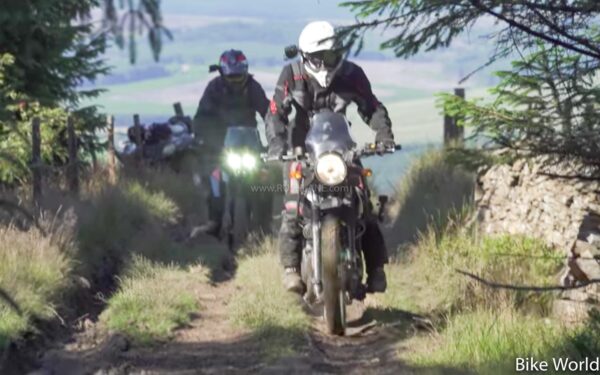 The vehicle of choice for such extreme terrain is obviously true-blue dirt bikes. However, as it turned out, both 390 and Himalayan performed brilliantly and reached the top of the hill without any major issues.

As the riders enjoyed their campfire and beer on top of the hill, they shared their experiences of riding the bikes. KTM 390 Adventure naturally has an edge over Himalayan, as it is sharper, more powerful, has better suspension and utilizes advanced tech.

However, that in no way undermines Himalayan’s performance, as it too raced up the hill just like 390 Adventure. As a matter of fact, climbing steep hills was much effortless with Himalayan than 390 Adventure according to the riders.

Some issues with 390 Adventure experienced by riders include the problem of traction control stall and weak-looking plastic engine guard. In case of Himalayan, there were issues with riding position and braking. However, these issues did not create any major challenges for the riders during their journey. Overall, both bikes proved that they are quite fit for adventure.

As compared to Himalayan, KTM 390 Adventure definitely has the power advantage on its side. Powering the bike is a 373.3cc DOHC single cylinder engine that churns out 43 bhp of max power and 37 Nm of max torque. In comparison, Royal Enfield Himalayan’s 411 cc oil-cooled engine makes 24.3 bhp and 32 Nm. However, Himalayan is much more affordable at Rs 1.87 lakh to Rs 1.98 lakh. 390 Adventure BS6 variant is priced at Rs 3.04 lakh (ex-showroom Delhi).