Renault has been testing a new low cost MPV on Indian roads for past couple of months. Codenamed RBC, this MPV is based on a CMF-A+ platform, which is a modified version of Kwid’s CMF-A platform.

Renault Kwid MPV has been spied once again, and this time its interiors have been revealed. The test mule was spotted by automotive enthusiast and Team-BHP member Chandra Prakash Sinha. The images were clicked when the car was parked on the Jaipur bypass. 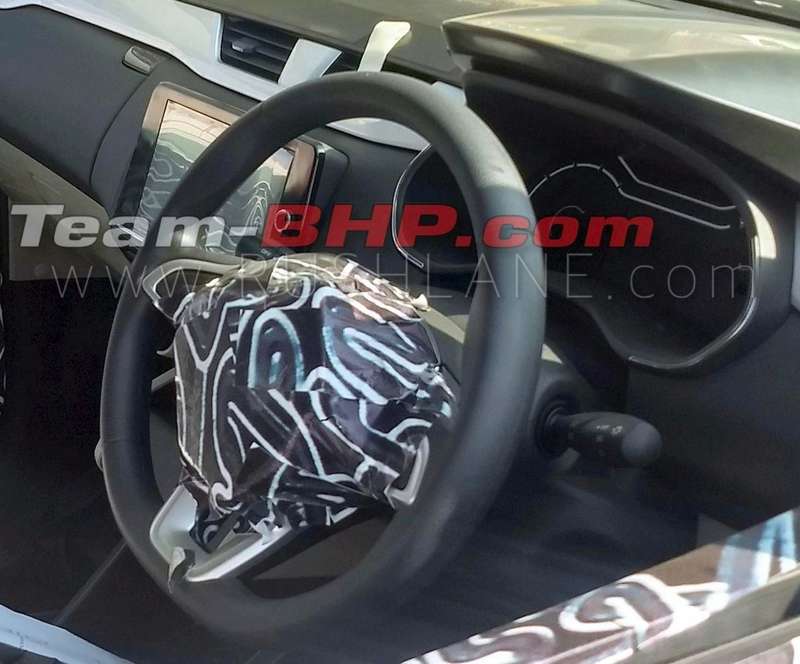 These are the first interior / dashboard images of the Renault Kwid MPV. The spy shot confirms the presence of dual tone dashboard with faux aluminium finish – to give it a premium feel. Steering wheel is flat bottomed, with leather cover. It also has steering mounted controls.

In the center is a touchscreen infotainment system, which seems similar to the one we have seen on board the Kwid MPV. It will feature audio, video and navigation. Rear camera sensors with display could also be offered as this is going to be an MPV.

The gear lever is the one which we have seen on board Duster CVT / AMT. Considering that this is going to be a low cost vehicle, based on Renault Kwid, offering CVT will be an expensive affair. Instead, the transmission is via AMT gearbox. This would make Renault RBC MPV first 7 seater MPV to be offered with AMT gearbox in India.

Powering the Renault Kwid MPV could be the same 1.0 liter 3 cylinder petrol engine which is offered with Kwid. This engine delivers 67 hp and 91 Nm via 5 speed MT / AMT. The engine could be tuned to deliver more power and refinement on board the Kwid MPV.

Renault India sales are on the decline. They desperately need a new product in order to boost sales. Kwid is currently their best selling car, which delivers about 5,000 units a month. In spite of this, the company’s total sales hover below the 7,000 mark on average.

Second best selling Renault in India is Duster, which registers about 600 units a month, while the remaining is registered by Lodgy MPV and Captur SUV. With the help of Kwid based MPV, Renault India could be hoping of adding sales. Expect the Kwid MPV to be priced in the Rs 6-9 lakhs range. Once launched, it will take on the likes of Maruti Ertiga in the entry level MPV segment.