Renault Triber sub 4 meter MPV has made its global presence felt in Delhi. The Triber is the joint project between Renault teams in France and India while it will be produced at the company plant in Chennai.

Sales in India are expected to commence from later this year. The Triber is the first of 4 new cars being planned by Renault India over the next two years in an attempt to increase sales two fold by 2022.

Renault Triber is positioned in the sub 4 meter space and on a reworked version of the CMF-A platform. It is a comfortable and spacious 7 seater which is directed at larger families and a younger set of buyers in the country.

It boasts of the latest Renault design language with a large U shaped front grille with the Renault logo on the top, rectangular headlamps with projector beams, LED DRLs on bumper and wide arrow shaped intakes.

Renault Triber sporty stance is enhanced by a muscular bonnet and roof rails along with wider windscreen and shorter front and rear overhangs. The Renault Triber is offered with 14” wheels as standard or with optional 15” wheels and dimensions stand at 3,990mm length, 1,739mm width and 1,643mm height. Wheelbase is at 2,636mm and ground clearance is at 182mm.

The interiors of Renault Triber are comfortable for upto 7 adults in a three row layout. The interiors are done up in a black and beige color scheme. Seating is comfortable with second row seats being sliding, reclining and foldable while third row seats are two independent removable seats. 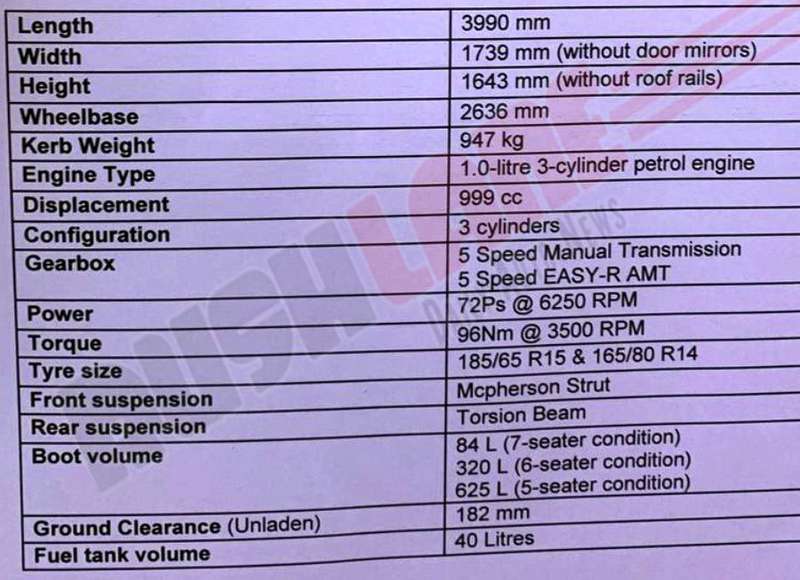 There are rear AC vents and power sockets for all passengers while boot space is at a maximum of 625 liters. Other interior features include an 8” touchscreen infotainment system with Android Auto, Apple CarPlay and video playback.

There are three virtual dials seen on the 3.5” instrument cluster offering vital information to the driver. Where safety is concerned, the Triber gets dual front airbags, ABS, rear parking sensors and speed alert system while the top spec variant also gets a reverse camera and passenger side airbags.

Renault Triber gets its power via a 1.0 liter SCe petrol engine, borrowed from the Renault Kwid, offering 72 hp power at 6,250 rpm and 96 Nm torque at 3,500 rpm mated to a 5 speed manual gearbox and a 5 speed AMT. With launch planned in July, and prices expected to start from Rs.4.75 lakhs, the Renault Triber will compete with the Datsun GO+ and Maruti Suzuki Ertiga along with premium hatchbacks such as the Maruti Suzuki Baleno, Hyundai Elite i20 and Honda Jazz.