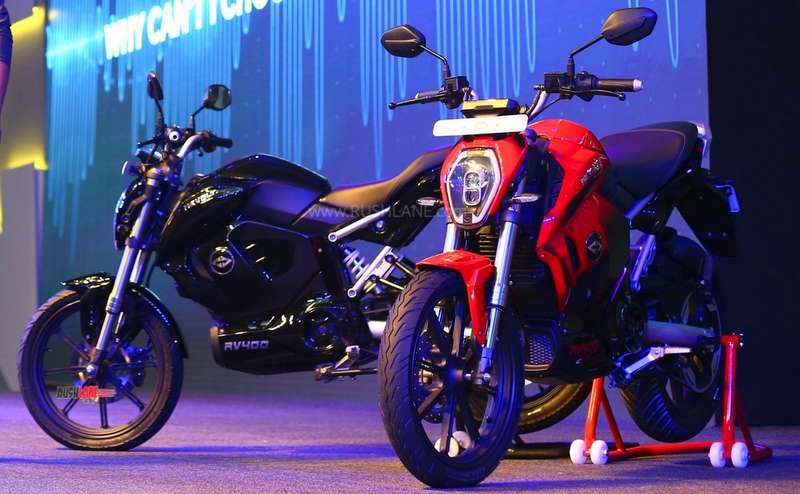 Gurgaon based Revolt Intellicorp Pvt. Ltd. has unveiled India’s first AI enabled motorcycle. The RV400 will be open for bookings from 25th June 2019 at a down payment of Rs.1,000 via RevoltMotors.com and on Amazon India.

RV400 will enter production at the company’s manufacturing unit in Manesar, Haryana. Launch will happen in July, which is when prices will also be revealed. Launch will happen in phases. In the first phase, the bike will be launched in NCR, Pune, Bangalore, Hyderabad, Nagpur, Ahmedabad and Chennai over the next 4 months.

RV400 is presented with colour options of Rebel Red and Cosmic Black and several first in class features. Below is the first TVC video of Revolt electric motorcycle.

The AI enabled motorcycle receives a sculpted body and ergonomics that offer a comfortable riding position. Set to attract a younger segment of buyers in the country, the RV400 not only commands premium looks and attractive features but also comes in with intelligent technology.

The RV400 can be charged via a 15amp home or office plug in system in a matter of 4 hours. You can also carry the battery pack inside your office or home, and charge it there. Revolt RV400 with three riding modes of Eco, City and Sport has been confirmed by ARAI to have a range of 156 kms on a single charge in Eco Mode. This will stand at around 80-90 kms in City Mode and at 50-60 kms in Sports Mode. It has a top speed of around 85 kmph.

The RV400 electric bike gets imported motor and batteries while the Battery Management System and the Electronic Control Unit have been designed and built in-house by the Revolt R&D team.

Being India’s first Artificial Intelligence enabled motorcycle, it gets features such as geo-fencing, anti theft and geo-tagging. The Revolt App which is available on Android and iOS also offers features such as door step battery delivery, mobile swap stations, sound selection and information on bike statistics such as range, total riding hours and real time diagnostics.

The electric motorcycle also receives artificial engine sounds that can be switched on or off by the rider. Suspension is via upside down forks in the front and mono shock at the rear while braking is via disc brakes at both ends. The RV400 however does not receive ABS.

No pricing has been announced as on date but estimates put the RV400 in a price range of around Rs.1.1-1.25 lakhs.