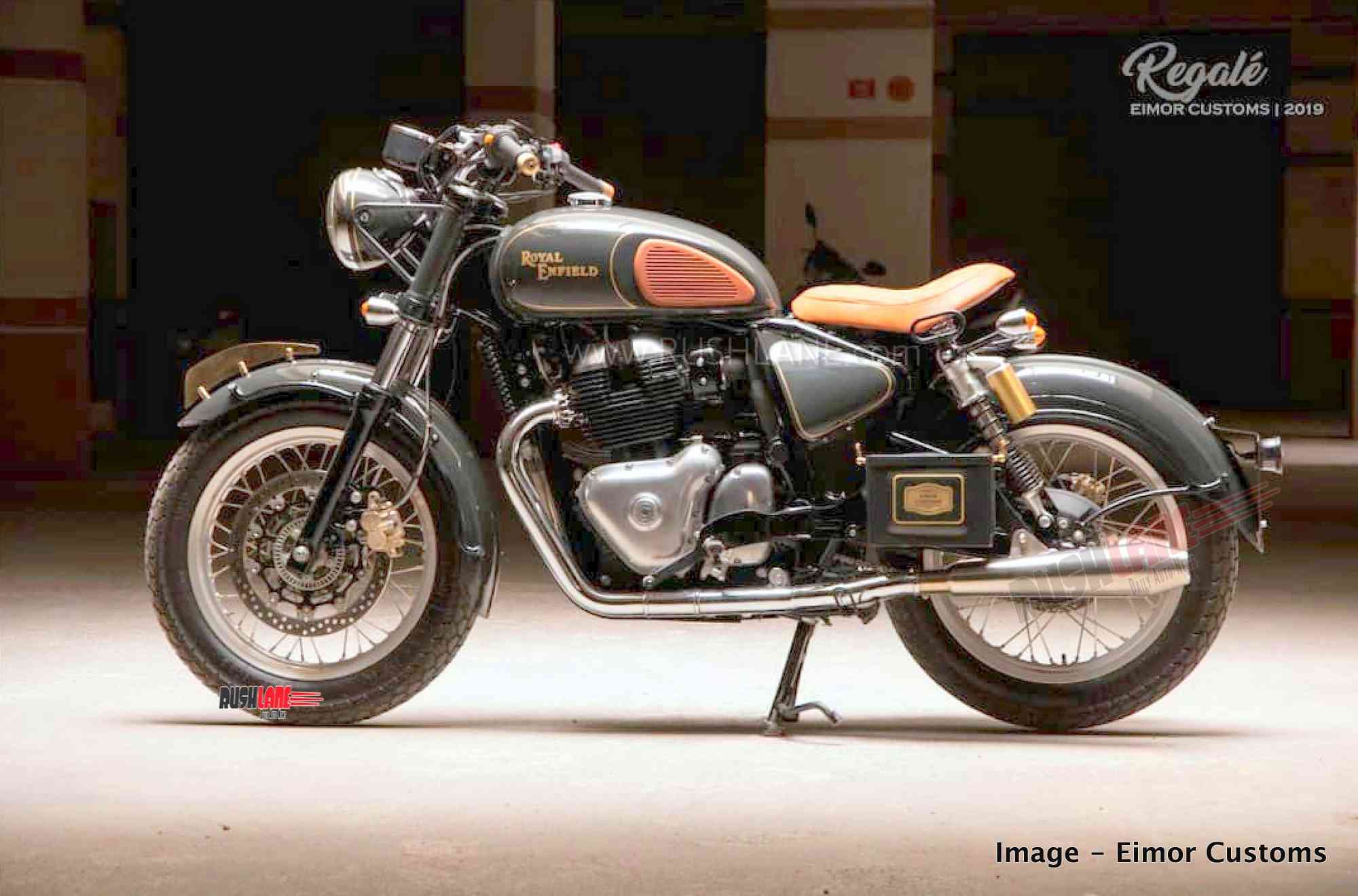 Hyderabad-based EIMOR Customs has executed a tasteful modification of the Royal Enfield Interceptor 650 into what they call as Regale Bobber. The custom Royal Enfield 650 Bobber motorcycle was showcased at the recently concluded Rider Mania 2019 in Goa.

As the name suggests, the retro-classic roadster has been transformed into a quintessential Bobber with very good attention to detail and a finesse that makes the bike look almost official. The motorcycle ditches its stock handlebar in favour or a flatter unit. It also makes do with a single instrument dial instead of stock model’s two pod unit.

For starters, the custom Royal Enfield Interceptor 650 adopts an impressive dark grey paint scheme with contrast golden accents and letterings. The combination works very well and is further complemented by brown knee pads on the fuel tank. Below is a walkaround video.

The front fender ornament, additional body-colored RE branded storage boxes on either side, typical Bobber-style saddle finished in brown quilted leather, rear suspension-mounted turn indicators and a tyre hugging rear mudguard are the other highlights. The Royal Enfield Regale Bobber 650 also employs sleek and flatter chrome silencers instead of the upward sweeping and chunkier stock units.

There seems to be no performance related modifications to the motorcycle. The Royal Enfield Interceptor 650 derives its power from a 648 cc parallel-twin air/oil-cooled motor which benefits from fuel injection. Matched to a 6-speed gearbox, the motor delivers 47 hp and 52 Nm of torque.

Suspension system comprises regular telescopic fork at the front and gas-shocked twin shock absorbers at the rear. Spoke rims with 100/90-18 front and 130/70-18 rear tires appear to have been carried forward from the original motorcycle. The Interceptor 650 employs front and rear disc brakes with standard dual-channel ABS.

The original motorcycle weighs a shade over 200 kg. The custom single seat Royal Enfield 650 Bobber is likely to weigh a little less on the account of losing a few components.

Royal Enfield has been showcasing official custom projects based on the 650 Twin platform at regular intervals ever since the launch and this particular example created by EIMOR is right up there in terms of design and quality.