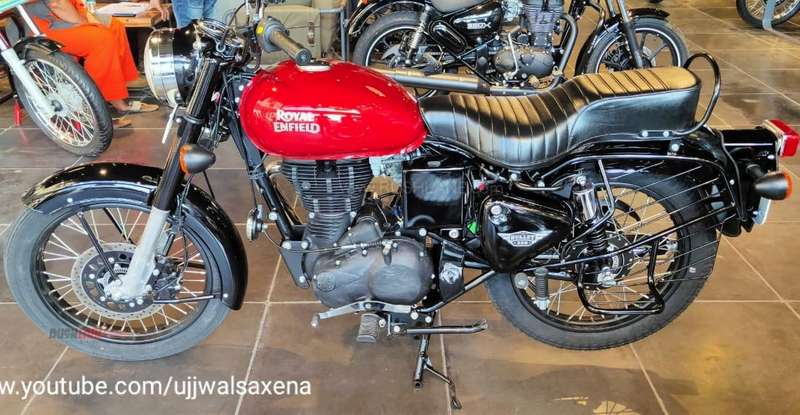 At a time when RE is posting double digit sales decline, Royal Enfield Bullet X 340 and X 350 ES have been launched in India. Priced about Rs 10k lower than the current Bullet 350, the idea is to boost sales at a time when dealers are struggling.

Based on the existing Bullet platform, Royal Enfield Bullet 350 X and the ES 350 X use less chrome, and more of black colour – a similar treatment that is seen on the the Thunderbird X range. But where the TBX range looks more premium, the Bullet X range looks cheaper.

Bullet X gets spoke wheels, unlike the alloys with tubeless tyres on the Thunderbird X. The Bullet X 350 fuel tank features a Royal Enfield sticker, while the X 350 ES features Royal Enfield backing in 3D. Ujjwal Saxena Youtube Channel has managed to create a detailed walkaround video of the two new RE motorcycles. You can watch the video below.

Where engine specifications are concerned, the RE Bullet 350X and the ES 350X gets the same engine that powers the Bullet 350. This 346cc, single cylinder, air cooled engine with TwinSpark ignition offers 19.8 hp power and 28 Nm torque mated to a 5 speed gearbox.

As of now, the engine will be BS IV compliant while the company is working on a BS BS VI engine which will make its way onto the Bullet, Classic and Thunderbird range prior to the 1st April 2020 deadline. But this will also result in a price hike.

This new intervals are valid on the Bullet, Classic and the Thunderbird range of 350 and 500 cc motorcycles. This has been done to reduce cost of ownership. RE says that the new schedule will bring in 40% cost savings for an RE owner.