The Royal Enfield Classic 350 is easily the most popular choice in the Chennai-based motorcycle manufacturer’s ‘UCE 350’ single-cylinder lineup. Earlier this year, it was updated to BS6 emission norms with prices starting at Rs 1.67 lakh ex-showroom. This is a hike of roughly Rs 14,000 over its phased-out BS4 counterpart.

Meanwhile, Royal Enfield is almost ready with the next-gen air-cooled ‘UCE 350’ range. The portfolio starts with the much-awaited Meteor 350 (Thunderbird 350/350X replacement. Royal Enfield had discontinued its ‘UCE 500’ lineup towards the end of BS4 era due to poor demand and rising competition. Furthermore, the highly desirable 650 Twins were available at a reasonable price jump. Potential customers could not find logic in buying a ‘500’ rather than paying extra and riding home a ‘650’ parallel-twin.

Unlike the current BS6 ‘UCE 350’ lineup, the next avatar supposedly packs an OHC (Over Head Cam) setup. Performance figures should see a significant bump and one can expect a much more refined riding experience. 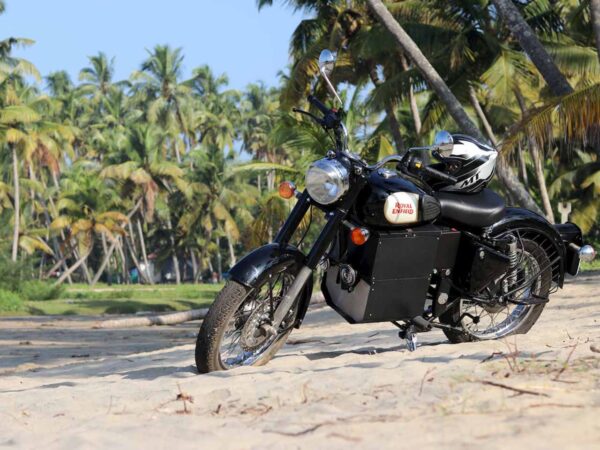 While the wider majority of Royal Enfield enthusiasts eagerly wait for the next ‘350’, Kerala-based automotive components manufacturer Hound Electric has given a BS4-era Classic 350 an electric twist. Dubbed E-Bullet, the idea came from Hound Electric’s CEO, Paul Alex. Interns D Harikrishnan and Mustafa assisted him in the Royal Enfield EV project.

Work started almost a year ago. The initial plan was to make an all-electric Hero Splendor. However, the motor and battery configuration could not fit in the budget commuter motorcycle’s small tubular double-cradle chassis, without substantial alteration. The donor Classic 350 (built using factory parts over a frame sourced from a local scrapyard) provided enough room. Hound Electric states that it was almost a direct powertrain swap, minus a few additional fabrications. 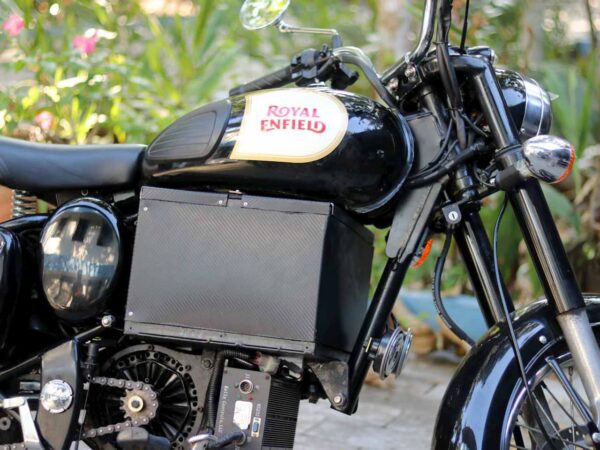 Total build cost hit only about Rs 35,000 since Hound Electric already had the electric components. The E-Bullet might not sport the best packaging (there is literally a box underneath the stock fuel tank) but aims to be a good example of retrofitting an emission-free powertrain in a motorcycle. UK-based Electric Classic Cars has done something similar with the ‘Royal Enfield Photon‘ despite being way more expensive.