The Royal Enfield Classic 500 will be discontinued soon, but is getting a final goodbye in the form of the limited-edition Tribute Black units.

After several reports and rumours, Royal Enfield has officially confirmed that its popular 500 line-up (including the Classic 500) is going to be discontinued. The online-only sale for the motorcycle starts on 10th February (from 2pm to 5pm) via a dedicated page on the official Royal Enfield website. The advance booking amount stands at Rs 50,000 and is non-refundable (if your booking is confirmed).

As the Chennai-based motorcycle manufacturer states, the Classic 500 Tribute Black is ‘the last to carry the iconic long-stroke single-cylinder UCE 500cc engine’. The last-of-its-kind motorcycle has been handcrafted at Royal Enfield’s legendary Tiruvottiyur factory and will be available in one exclusive shade — Classic Tribute Black (Gloss Black with Gold accents). The pinstripes on the fuel tank are hand-painted by the famous Kumar brothers. 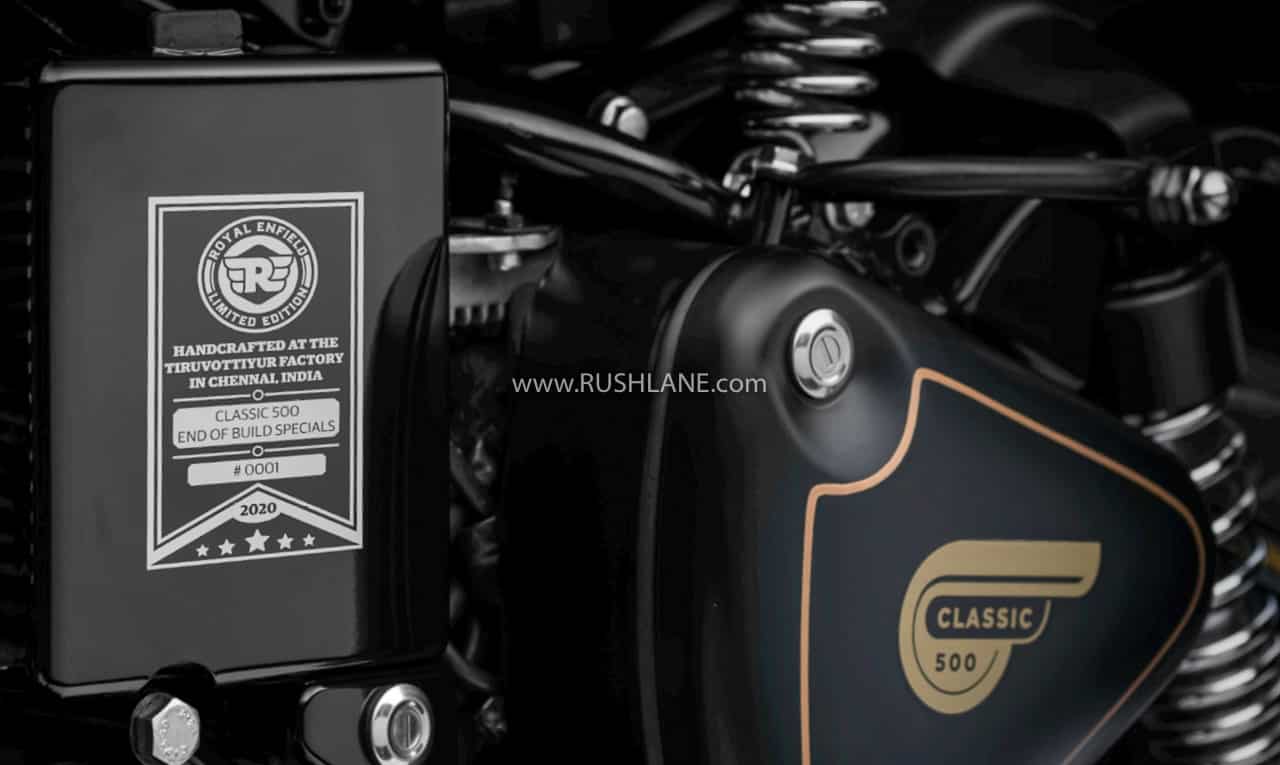 Other highlights of the Royal Enfield Tribute Black includes quilted leather seats finished in Black along with White contrast stitching. There is a hallmark plaque that commemorates the model’s legacy, carrying the respective ‘End of Build’ serial number on each unit.

Coming to the engine, the 499cc air-cooled fuel-injected single-cylinder UCE (Unit Construction Engine) power plant still remains in its original BS4 format. It has been on the market for more than a decade and churns out 27.2bhp and 41.3Nm of torque. The engine is mated to a 5-speed gearbox.

Being still BS4-compliant, the limited-edition Royal Enfield can be legally registered only till 31 March 2020, before mandatory BS6 emission norms kick in. The company is yet to share the exact number of units available for purchase. However, the plaque carrying the serial number houses four digits (#0001).

Royal Enfield Classic 500 models have not been doing so well lately and had barely touched a hundred units in the last few months. Hence, the company may not have a lot of expectation and would plan production based on the actual bookings made online. After paying the initial booking amount, customers will receive a confirmation email and are expected to pay the remaining amount at the dealership they have selected during the booking process. The company aims to deliver each Classic 500 Tribute Class unit within a month from making the full payment.