Royal Enfield last posted a positive sales growth back in October 2018. From Nov 2018, the company has posted decline in sales for 4 consecutive months.

Exports for Feb 2019 was up by 49 percent at 2,564 units, up from 1,723 units; thanks to 650 Twins. While exports were more than favourable, their limited number did little to improve overall sales performance. In all, Royal Enfield reports monthly sales (domestic + exports) at 62,630 units, at sales decline of 14 percent, down from 73,077 units.

YTD (April to February) 2019 domestic sales are reported at 746,839 units, up 3 percent from 727,021 units sold in the said 11 months in the last FY. And while things do look in the green now, the single digit growth percent could shrink even further following March sales as favourable market conditions aren’t the order of the day. 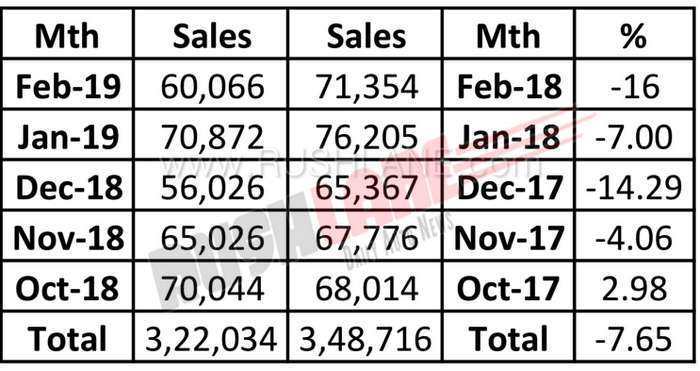 Commenting on Royal Enfield’s performance, Siddhartha Lal, Managing Director and CEO Eicher Motors Ltd, said, “The latter half of 2018 was a challenging period for the two-wheeler industry in India. Factors like increased insurance requirements, rising raw material costs and the subsequent price increase due to regulatory safety requirements impacted the momentum of the industry. Royal Enfield’s market share recorded improvement on a sequential basis, while volumes in the quarter were impacted. We believe this is a temporary impact due to a price reset. We continue to remain optimistic about the trend of premiumization in the motorcycling industry, and are confident that this trend will continue in the future.”

This comes at a time when most manufacturers have started 2019 on a slow note. Continued slow performance would mean that Q4 of the current FY isn’t going to move mountains for manufacturers.