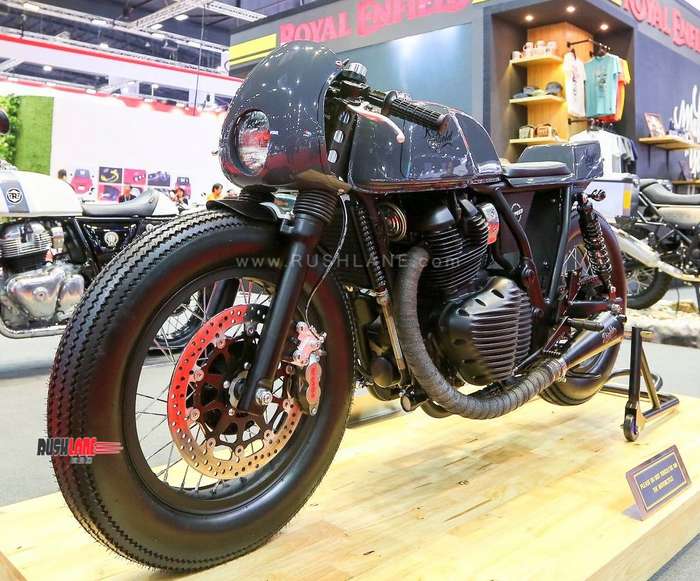 Keeping company with ‘The Prime Project‘, a custom Royal Enfield Interceptor 650, at the Bangkok International Motor Show, is the Royal Enfield Vayu. Based on the Continental GT 650, the Vayu custom motorcycle continues to be a café racer but with a completely different character compared to the stock bike.

The Royal Enfield Vayu which is a product of K-Speed Customs, retains the original motorcycle’s fuel tank but rest of the body work is bespoke. A smooth aerodynamic front fairing with circular headlamp, flat saddle and boxy tailpiece (with circular taillights) render the Vayu a vintage appeal. The shiny grey paint job suits the custom motorcycle well.

Most significant modification, however, is the clutch cover and transmission casing which feature heat fins. The entire engine is finished in matte black to complement the body work’s grey. The motorcycle also benefits from a completely custom Diablo exhaust system. The Royal Enfield Vayu also gets bespoke chain and sprockets. Further mechanical enhancements include performance air filter, and custom SS rear shock absorbers.

The custom low-set clip-on handlebar, spoke wheels, super fat tyres, complete the quintessential café racer setup. It has to be said that the classy brown leather gloves and grey helmet goes well with the Vayu. No performance figures are released but the extent of modification should alter the powertrain characteristics significantly. For reference, the stock Continental GT’s 648 cc air/oil-cooled parallel twin motor is good enough for 47 hp and 52 Nm of torque. The motor is mated to a 6-speed gearbox.

While the 320 mm front and 240 mm rear brake discs have been retained, the front system gets upgraded Brembo calipers (stock model employs ByBre which is Brembo’s cost effective brand). The original bike’s tubular twin-cradle steel frame (developed by Harris Performance) has also been carried forward without much changes.

Royal Enfield’s strong presence at the BIMS 2019 comes a few days after the announcement of an assembly plant in Thailand. The company’s first assembly facility outside India is set to be operational from June 2019. The plant will help Royal Enfield have a better penetration into what is one of the lucrative two wheeler markets in Southeast Asia. More images of Royal Enfield VAYU project, below.