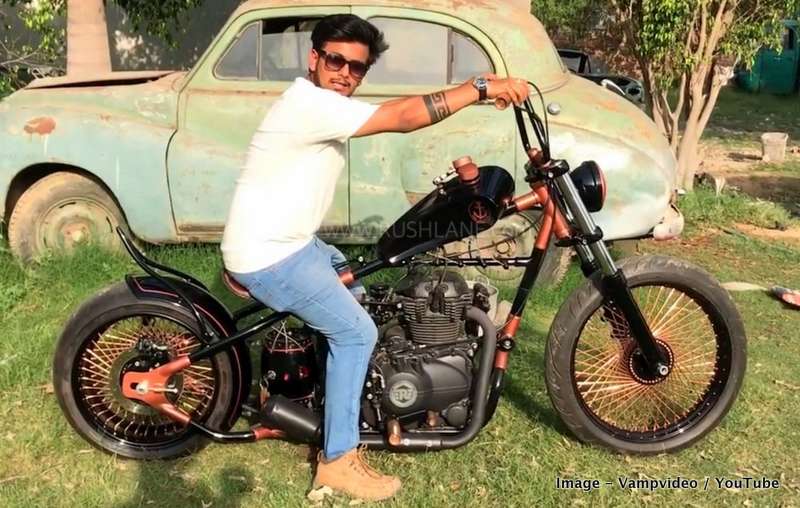 We have seen several examples of Royal Enfield Thunderbirds and Bullets transformed into choppers with extreme rake angles and tasteful elements but this is the first time we have come across the Himalayan turned into one. Turning a tall adventure tourer into a low riding chopper is a bit unconventional even for custom bike builders but it has to be said that this is a pretty neat job.

Executed by TNT Motorcycles based in Delhi, the custom Royal Enfield Himalayan motorcycle costs around Rs 7 lakhs (excluding the cost of bike, which is about Rs 2 lakhs on road). You could get an entire fleet of Himalayans for that money but this one sure does look unique. Save for the black finished engine, the custom bike gets rid of Himalayan’s stock components.

For starters, the fully bespoke frame belongs to an entirely different school of thought. The bike is underpinned by a massive tubular triangle that increases the wheelbase quite significantly compared to the stock model. Watch the detailed video by YouTube channel Vampvideo below.

While the front end is suspended by a sturdier telescopic fork, the rear features hardtail configuration (it’s the saddle which is suspended and not the chassis).

A slender custom fuel tank and a classic leather saddle are placed along the steeply raked chassis and the handlebar is mounted high to achieve quintessential chopper ergonomics. While this configuration does wonder to the motorcycle’s stance, riding it is not everybody’s cup of tea. Short riders would find the motorcycle a bit handful.

The attention to detail is pretty impressive. The chassis is finished in black-copper dual-tone theme and the spokes on the wheels form a nice looking pattern. The motorcycle also receives a custom exhaust and a barrel-shaped case below the saddle to accommodate the electrical modules. The meaty tyres and a massive rear tyre hugger add to the motorcycle’s appeal.

The Royal Enfield Himalayan custom chopper certainly prioritizes form over function. The bike eschews front braking and relies only on the single disc at the rear.

The engine appears to have been carried forward without any significant performance upgrades. The stock unit displaces 411 cc (single-cylinder) and produces 24.5 hp and 32 Nm of torque. The engine is paired with a 5-speed gearbox.