If you happen to be an auto enthusiast, you might already be aware of the fact that German automotive brand, Volkswagen owns multiple brands under its umbrella. The brands include Porsche, Lamborghini, Bugatti, Bentley, Audi, VW, Skoda and SEAT.

While in this part of the world, we have been exposed to most of the mentioned brands. But SEAT is still one of those brands which many might not know about. SEAT happens to be a Spanish car maker which sells its cars across the globe and is also part of the VW group.

In India, directly or indirectly, most of the Volkswagen brands are already present. However, SEAT has no presence in the country. Interestingly, multiple SEAT cars are getting spotted in the nation regularly. Last week too we had shared spyshots of SEAT Arona test mules. Now the test mule has been spotted again, this time on the Mumbai-Pune highway. Hat tip to automotive enthusiast Aman Kharat for sharing the spy shots.

So, the spotting of SEAT branded cars raises questions, is VW planning to bring this Spanish brand to the country? Well, we don’t think so. VW already has two brands, VW & Skoda which will be sufficient to cater to the same segment of customers. So, then what can possibly explain the Arona on test in India?

What is Seat Arona doing in India

VW is currently completely transforming its Indian business. It has given its subsidiary, Skoda, the task to lead the India 2.0 project through which it plans to reposition itself, bring in highly localized vehicles and improve its market share in the country. One critical cog to this transformation will be the MQB A0 IN platform which will land up becoming the base of multiple products for the VW group. 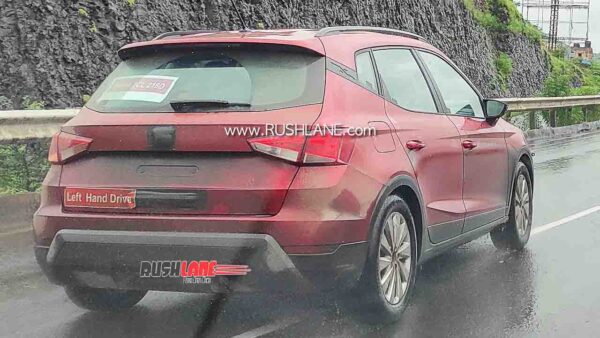 The SEAT Arona is based upon VW’s MQB A0 platform. Most probably, the test mules are being used by VW/Skoda engineers to test & localize the same platform. The Arona can be used as a bench-mark for the upcoming VW group crossovers. The crossovers include the VW Taigun and Skoda’s SUV based upon the Vision IN concept. Both the new crossovers will be based upon the MQB A0 IN platform and that is probably being tested by VW engineers under the disguise of these SEAT Arona SUVs.

So, it is almost certain that the Arona isn’t coming to the Indian market. However, we can expect the Taigun and Vision IN to come sometime later next year with TSI petrol motor and compete directly with the likes of Hyundai Creta and Kia Seltos. Pricing should be competitive, thanks to the heavy localization which the MQB A0 IN platform should bring in.