Among the growing craze of SUVs in India, demand for sedans has somewhat subdued. Over the past few years, preferences of the buyers have changed; who now find it more sensible to buy an SUV at a similar price point with similar sets of features.

This change in thought process can be attributed to compact SUVs that have become more comfortable, offer more space and have added more features to their kits. At almost similar prices, consumers will definitely go for the road presence of an SUV. However, that doesn’t indicate that every sedan has had a tough outing.

For instance, like the compact and subcompact SUV segments, the C-segment sedan space has been pulling off decent numbers due to their attractive offerings. The numbers are not comparable to those in the SUV categories but still not bad enough when considered to other segments in the sedan category. With many attractive offerings, the C-segment sedan space still proves to be valuable for many for most parts. 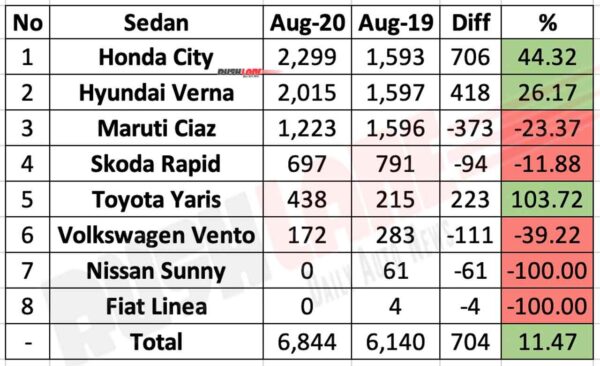 Leading the way is the undoubted king of this segment- Honda City received a whole new generation in July this year. For decades, City has been the undisputed leader in its segment in India. Its ride and comfort backed by an impressive performance and tons of features make it the best selling sedan in this segment. Last month, Honda sold 2,299 units of City. This is 44% growth, as compared to Aug 2019 sales. This is second month in row that the City has been No 1 selling sedan in the segment. The City is on sale in both the new 5th generation and older 4th generation forms.

Tailing in on closely is Hyundai Verna which also received a mid-life facelift earlier this year. The looks are now much bolder and the number of additions to the equipment list is nearly innumerable. Hyundai retailed an impressive 2015 units of Verna last month finishing on the second position. The Hyundai offers a wider range of options as far as powertrains and transmission are concerned. Hence, a large demand in buyers. Verna sales in Aug 2020 were higher by 26%.

The Maruti Ciaz is next in third position with total sales of 1223 units. This is a decline of 23%, when compared to sales registered in Aug 2019. The Ciaz offers a roomy cabin with a very comfortable ride thanks to its smooth 1.5-litre K-Series engine.

Next up in fourth spot is the recently updated Skoda Rapid which now comes with a BS6 compliant 1.0-litre TSI turbo petrol engine. This engine is powerful and offers excellent performance and good fuel economy. The lack of diesel engines from Ciaz and Rapid has probably affected its sales as they are petrol-only models now. Aug 2020 sales stood at 697 units, as against 791 units in same month last year.

Toyota Yaris and Volkswagen Vento occupy the fifth and sixth spots respectively. Yaris despite being a value for money product hasn’t been able to attract the attention of audiences. The Vento, on the other hand, despite the same spirited engine as Rapid, comes at a hefty premium. Lack of space in the cabin, fewer features as well as outdated looks haven’t helped its cause either.