While the Smart ForFour will thrive in a congested city environment, it is too expensive for India

Smart, a popular European city car brand which was born out of a partnership between famed Swiss watch maker Swatch and Mercedes-Benz, has no official presence in India. The Smart ForTwo and ForFour micro-hatchbacks feel at home in congested urban environment with narrow seats and hard-to-find parking spots. These cars will excel in cities like Mumbai, Delhi, Bangalore and so on, but they are deemed too expensive for our market.

A Smart ForFour with private registration plates has been recently spotted in Bangalore, by automotive enthusiast Paulson. The car was spotted near a Mercedes Benz showroom. A little bit of digging showed that the five-door micro-crossover-esque hatchback is registered to Daimler India Commercial Vehicles (DICV). It has been registered in 2018 but interestingly there are no documented spotting prior to this instance.

Perhaps the vehicle spent most of its time indoors as a part of an internal project. After all, Mercedes-Benz Research and Development India (MBRDI) is based in Bangalore and plays a significant role in the automaker’s global R&D network.

It is also possible that, as the registration details suggest, one of DICV’s top expat officials wished to use the Smart ForFour as their official company car instead of a swanky Mercedes in a bid to beat the infamous Bangalore traffic.

So, the ForFour could be a private import as a company car. The proper registration suggests that the vehicle is not here for testing purposes and hence we don’t expect Smart to make its Indian foray anytime soon.

Smart ForFour at a glance

Introduced in 2014, the current generation of Smart ForFour shares its platform with the Renault Twingo small car. The entry-level model is powered by a 1.0-liter three-cylinder naturally aspirated petrol engine which puts outs a modest 70 hp while higher variants get a 0.9-liter turbocharged three-pot petrol unit which is good for 90 hp. There is also a EQ ForFour, a pure electric variant which has 82 hp on tap. 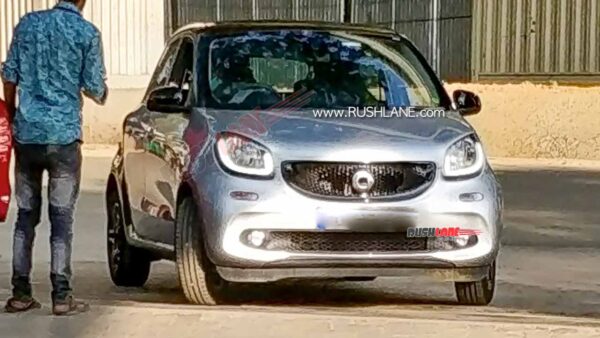 In terms of equipment, the Europe-spec Smart ForFour features a touchscreen infotainment system, multiple airbags, ABS, ESP, alloy wheels, dual-tone exterior color theme and so on. The ForFour is a zippy and nimble urban runabout.

The Smart ForFour is for the European market what the Maruti Ignis is for India. The SUV-ish hatchback a.k.a. micro-crossover is an emerging concept in our market with three new models in the pipeline namely the Tata HBX, Citroen CC21 and Hyundai AX1 (all are codenames).