The lockdown may have eased and public transport services have been restored but the economy is yet to rectify itself. In the month of August 2020, even as there is a slight MoM increase in two wheeler sales with more buyers opting for personal means of travel in fear of contracting the deadly virus, people are still very thrifty with their money considering the current economic situation in the country.

When assessing statewise two wheeler sales, it may be seen that the top order has not changed between July and August 2020. Uttar Pradesh, Tamil Nadu and Maharashtra continued to claim the top three spots. 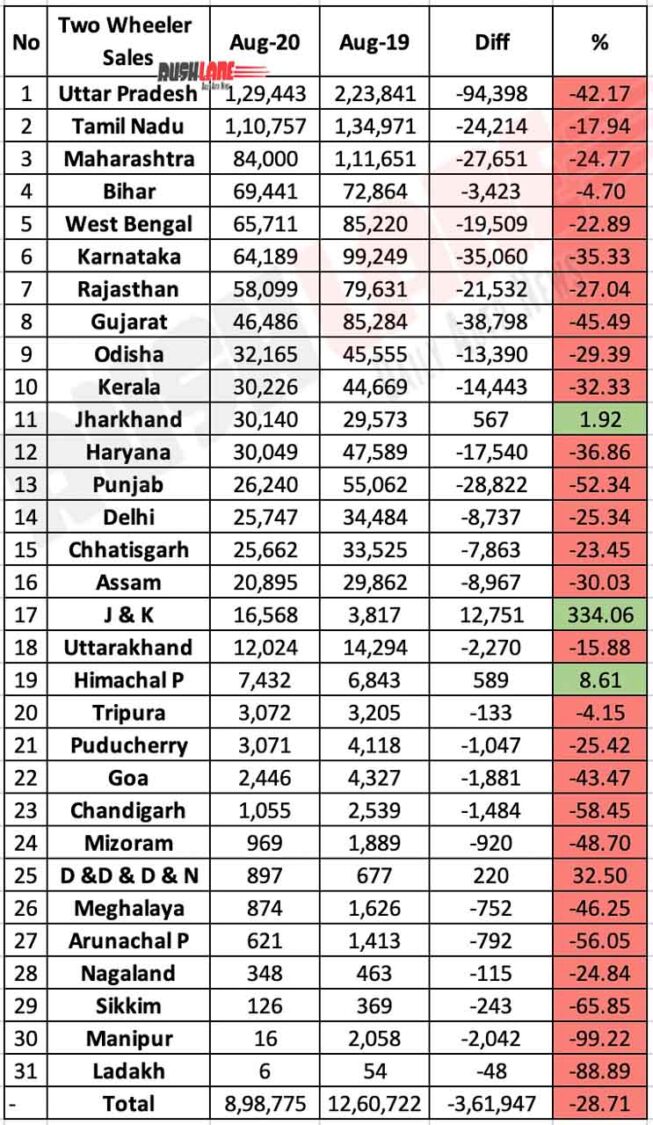 Positive growth was noted in the state of Jharkhand. Sales of two wheelers increased by 1.92 percent in Jharkhand with 30,140 units sold in the past month, up from 29,583 units sold in August 2019. The two other states where there was an increase in two wheeler sales in August 2020 over that of August 2019 was Jammu and Kashmir, Himachal Pradesh and D&D and D&N.

The north eastern states of Sikkim, Manipur and Ladakh noted significant de-growth in terms of two wheeler sales last month. Sales in Sikkim dipped 65.85 percent to 126 units, down from 369 units sold in August 2019. Sales were even lower when compared to 147 units sold in July 2020.

The upcoming festive season along with continued preference for personal mobility coupled with strong rural demand could bring in better sales in the months ahead. Such is the level of optimism that scooter and motorcycle makers have already revised their yearend production plans upwards by 8-25 percent to cater to this anticipated increased demand.