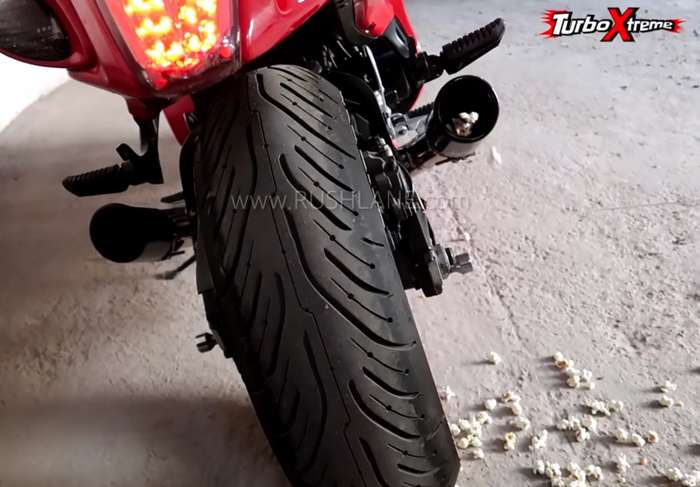 This could probably be the most expensive popcorn making machine to date. The owner of this Suzuki Hayabusa, has shown how one can pop corn in the exhaust of a superbike bike.

The urge to eat some popcorn while watching a movie, stirred up the enthusiasm of the owner of this Suzuki Hayabusa. He goes into his garage and revs up the red colored Hayabusa and stuffs some corn kernels into the exhaust while he is being watched by eager children waiting to grab some popcorn.

This is not the stock exhaust of the Hayabusa bike but an aftermarket unit from Akrapovic. For a start nothing happens as the temperature is too low. Then as temperatures rise, the popped corn emerges from the exhaust and falls to the ground. The slow start is followed by a rain of popcorns as the temperatures rise, thus proving a point to the owner that the Hayabusa is of more use than one. Video credit Turbo Xtreme on Youtube.

It is not recommended that these popcorns are eaten, especially by the children present; for hygienic reasons. It is advised to use more conventional and hygienic ways of popping corn.

The Suzuki Hayabusa in the video above, is not the latest version. The latest version on sale in India is powered by a 1,340cc, in-line, 4 cylinder, liquid cooled engine offering 197 bhp power at 9,500 rpm and 155 Nm torque at 7,200 rpm mated to a 6 speed transmission.

Initially launched in 1999, this track focused sports bike was acclaimed as the fastest production motorcycle in the world with a top speed of 312 kmph. It gets Brembo front calipers with 310mm twin discs in the front and rear Tokico calipers with 260mm disc at the rear. Suspension is via 43mm KYB inverted front forks and link type rear suspension. The Hayabusa weighs a total of 266 kgs and sports a 21 liter fuel tank.

2019 Hayabusa is priced at Rs.13.74 lakhs. It is offered in color options of Metallic Oort Gray and Glass Sparkle Black and though it may not hold the title as the most powerful or fastest production motorcycle as on date, it is still among the best drag motorcycles around. The current gen Hayabusa is the last of its kind as the bike will be discontinued in its current form once BS6 norms are implemented on 1st April 2020.