After discontinuing the passenger spec Jimny 5 seater in Europe, Suzuki has brought the Jimny in Europe as an LCV

Suzuki has had a tough time with the Jimny in the European market, majorly due to the emission norms of most European countries. Now, Suzuki has planned on figuring out a way around the regulations and smartly repositioning its offering.

The Jimny in its current 5-seater form will no longer be available in the European market in the future (was recently discontinued from the UK too). Instead, Suzuki is readying up a commercial vehicle based upon the Jimny.

Technically, this new vehicle will essentially be a 2-seater Jimny which will come along with a large luggage compartment. While Suzuki is trying to pitch it as an ideal product for small businesses, it most probably is making this transition to comply by European emission norms. 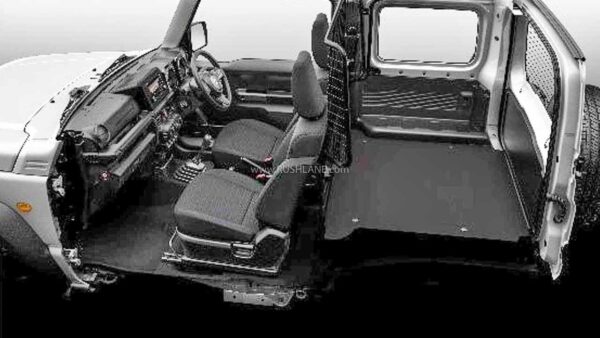 Reason for the Shift

Suzuki won’t be able to sell the Jimny in its current form in Europe as the emission norms for passenger vehicles are way too strict. However, there are significant relaxations for commercial vehicles in Europe. Hence, Suzuki is trying to cash-in on this fact and will be re-categorizing the Jimny as a 2-seater LCV so that it can continue with its sales operations.

Jimny will continue to draw power from a 1.5 litre NA petrol motor which can dish out 100 hp. It will come mated to Suzuki’s Allgrip Pro part-time AWD system. Technically, the entire powertrain setup will remain same between the 5-seater PV and 2-seater CV. However, the good news for Suzuki will be that it will be able to sell the Jimny despite it returning 173 gms of CO2 per km, thanks to the relatively lenient emission norms for LCVs in Europe.

With the new update, the rear passenger area will make way for a humongous cargo compartment which will have an overall capacity of 863 litres. Additionally, there will be a new safety partition which will ensure that stuff stored in the cargo area doesn’t move around into the seating area in the front. Like its 5-seater counterpart, the Jimny LCV too will use a ladder-frame construction.

Jimny’s future in India is still unclear. Maruti has been considering the launch of the Jimny since quite some time, but it seems that the Japanese manufacturer is still not convinced enough to bring in the vehicle in the near future.

The pandemic and the slowing auto sales too don’t build up a strong case for Maruti to plan upon additional investments. However, launch of new products like the 3-door Thar could help Maruti gauge the response from customers and help it to plan better regarding Jimny’s re-entry in India.