Over the decades, the Suzuki Jimny has grown into an iconic automobile, thanks to its simplicity, compact foot print and impressive abilities off the road. The Japanese automaker has managed to stick to the nameplate’s core characters every time it came up with a new generation of the mini SUV. No wonder that in most markets, the little Jimny has a waiting period stretching out to several months.

Design students tribute to the Jimny

Having a cult status with distinct design identity naturally puts the Suzuki Jimny in the radar of aspiring automotive designers. IED Turin students Raffaele Anile, Nicolo Bettinelli, Fiorenzo Fiorentino and Fabrizio Luciano found the Jimny’s raw character so fascinating that they decided to pay tribute to the vehicle through their dissertation design concept.

The Suzuki U:man concept created by the IED team derives inspiration from both Jimny and Vitara. The brief was to design an Suzuki SUV concept made for everyone rather going after extreme performance or resorting to over-designing. 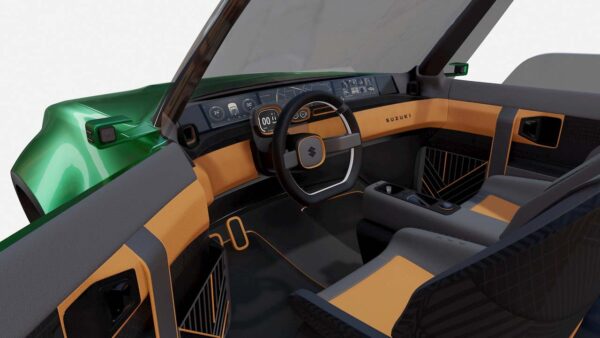 The Suzuki U:man, just like the Jimny, adopts a simple boxy design. The roof section is kept simple with the B-pillar also doubling up as a roll hoop. A sporty front fascia with headlight displays represent modern technology while the bumper with neatly hidden tow hitch enhances functionality. The bulging wheel arches and six-spoke wheels add to the U:man’s character without going overboard. The whole glass roof gives a convertible feel while ensuring insulation from weather.

While the exterior is all about preserving the classic identity, the interior is all about modern technology. The top part of the dashboard is made of displays that run across the full width of the cabin. The concept adopts an innovative HVAC which has blows air though gaps in the plastic panels of the dashboard. Features like wireless charging pad, advanced connectivity are on board.

The team has opted for a four-seat configuration instead of a conventional five-seat setup in a bid to offer equal comfort to all the occupants. The place between the two rear seats has been used for luggage storage.

The Suzuki U:man SUV concept is a design case study rather than a potential future model. So, the technical specifications of the vehicle have not been discussed by the creators aside from revealing that it has been designed for an electric hybrid powertrain.