Showcased at 2018 Auto Expo, Tata 45X is all set to make global debut at the Geneva Motor Show next month. 45X is a codename. But, what is the production spec name? Well it is Altroz. Tata Altroz name has been trademarked by Tata Motors and Tata Sons.

Also confirming the name Altroz is the hint posted by Tata Motors on their social media, and their latest teaser video, which reveals that the first letter of their new car is A and third letter is T. Name Altroz has been inspired by seabird called Albatross. 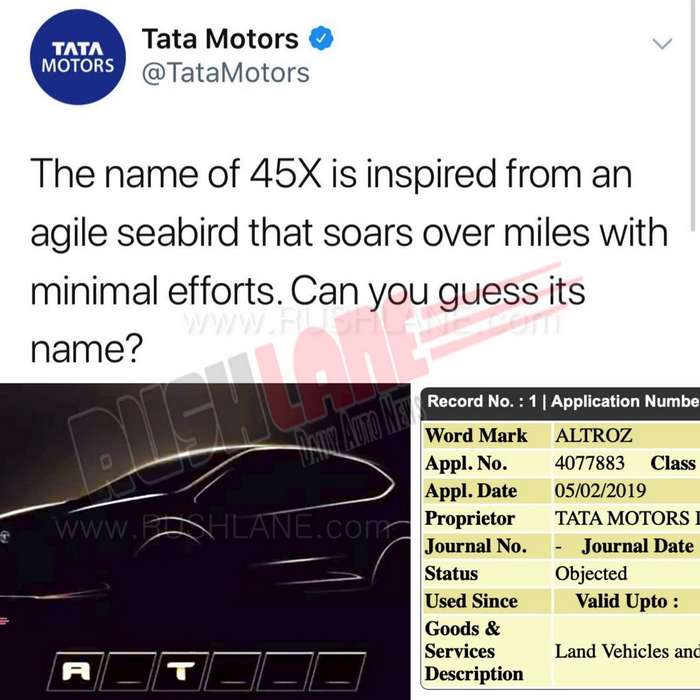 Tata Altroz will feature elegant and sporty looks, thanks to design and development work done by UK-based Tata Motors European Technical Centre PLC (TMETC). It has been spotted testing in production-ready guise on multiple occasions in the past few weeks. Images reveal details about the premium hatchback’s exteriors, most of which mirror the original concept model.

Concept model of Altroz measured 4,253 mm in length, 1,850 mm in width, 1,451 mm in height and has a wheelbase of 2,630 mm. However, production-ready Altroz is smaller and does not exceed 4,000 mm. It is built on Tata Motors’ Advanced Modular Platform, also known as Alfa.

2019 Tata Altroz will be launched as a premium hatchback. Customers will be getting various personalization options such as colour themes. Tata Motors will be using top-quality materials and advanced components to complement the car’s stunning and powerful looks.

New Tata Altroz will be available in petrol and diesel variants. Petrol variant could have a new 1.2-litre engine, whereas diesel variant will be using Tata Nexon’s 1.5-litre turbo-diesel engine. A mild-hybrid system could also be a possibility for petrol variant. Hybrid variant will improve fuel efficiency and allow it to meet Corporate Average Fuel Economy (CAFE) standards in 2022.

Expected to be launched ahead of 2019 festive season, Tata Altroz will most likely be positioned as a successor to Tata Bolt. It will compete with the likes of Maruti Baleno facelift and Hyundai Elite i20. Starting price of Tata Altroz could be around Rs 5.5 lakh.