Tata Motors is actively testing the 45X premium hatchback. It is confirmed for launch in 2019, after the Harrier is launched. Tata 45X was recently spied on test, automotive enthusiast and Team BHP member soumobakshi. The car was spied on the Tumkur road stretch.

Production version of the hatch is based on the concept seen at the 2018 Auto Expo, reveals certain exterior and interior features. The 45X will boast of an edgy design. It will receive an efficient engine lineup similar to that of Nexon.

The spy photos show that the car’s exterior has been camouflaged, but the dashboard is clearly visible. Thanks to this, we have the first clear photos of Tata 45X’s dashboard and touchscreen infotainment system. Expect it to offer similar features like Harrier’s system. This includes Apple Carplay and Android Auto, along with reverse parking assist.

Though the two cars are based on different platforms, the layout of the dashboard, touchscreen, AC vents is similar to what we have seen on board the Harrier. This could imply that there will be parts sharing between the Harrier and the 45X, thus allowing Tata to cut manufacturing costs. One can also see that the cabin seems spacious. 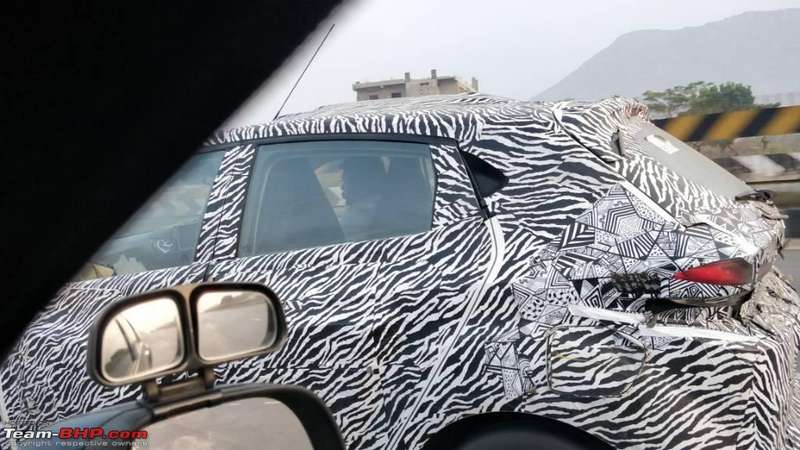 Tata 45X will be the second model to receive the IMPACT 2.0 design philosophy (first is Harrier). It gets a sloping roof, conventional door handles in the front and pillar mounted door handles at the rear. 45X has been designed and developed by Tata Motors European Technical Centre PLC (TMETC), UK. It is positioned on the company’s new Advanced Modular Platform.

Though the dimensions on the concept stand 4,252mm in length, 1,850mm in width and 1,451mm in height along with a 2,630mm long wheelbase, the production model is slated to be in the sub 4 meter segment so as to take advantage of price cuts in the country.

The production spec Tata 45X is slated to be powered by 1.5 liter Revotron petrol and 1.5 liter diesel Revotorq engines both of which will comply with BS VI emission standards and get mated to manual and AMT gearbox options. Prices will range between Rs.5.5 – 9 lakhs, similar to Maruti Baleno and Hyundai i20, both of which will get a facelift in 2019.