Tata Altroz EV has made its debut at Geneva International Motor Show 2019 today. The grand unveil saw Ratan Tata take centrestage. Two variants are on offer, one as a production ready car with petrol / diesel engine. And second, as an EV, which is a concept. Tata Altroz electric vehicle will be a first in premium hatchback segment in India. There is no official word out on the launch timeline, but rumours suggest Tata could launch the Altroz electric later next year. In 2019, they will launch the petrol and diesel version of the Altroz.

New Tata Altroz EV is seen in an electric blue exterior paint finish, the same shade was used in a lot of teasers in the past few days. In the front you have LED headlamps, which sit below the grille. The grille is finished in metallic paint, and seems to have an LED running across the width of the car. Alloys are machine cut dual tone 16 inch, Interiors are done in white. Expect the car to have a real world driving range of 150 to 200 kms. 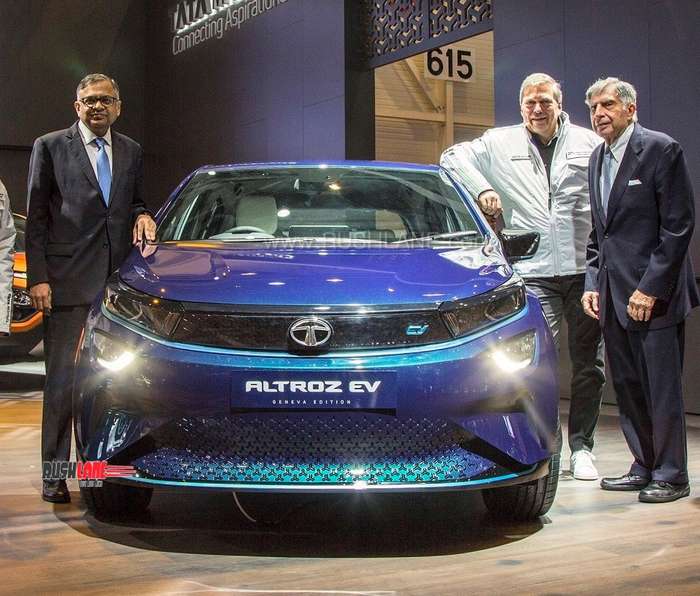 Altroz is the first Tata car to be based on new ALFA (Agile Light Flexible Advanced) Architecture. ALFA is a highly flexible platform and it is set to spawn a range of urban vehicles. ALFA Arc is scalable and it can be tweaked to accommodate multiple body styles such as compact SUV, coupe, hatchback, etc. It also supports multiple powertrains including hybrid and electric. ALFA optimizes cabin space and there’s plenty of room in the boot as well.

This means, that apart from full electric, Tata could also launch Altroz as a hybrid option in the future. Hybrid Altroz could help allay fears that people usually have about getting stranded when the battery runs out of their fully electric vehicle. It would be a good option till the time proper EV infrastructure is developed in the country. Govt of India has just announced phase 2 of FAME scheme, which will give subsidy of Rs 10,000 crores to EV buyers in India. Electric and hybrid car buyers can get subsidy of up to Rs 2.5 lakhs. This scheme will definitely help push EV and hybrid car sales in India.

Interiors are in line with its exterior body language. Altroz EV has sporty interiors. There is adequate space on the inside and various high-end features such as a large touchscreen infotainment system. A semi-digital instrument cluster and T-shaped central console. It will also have electric parking brake. It also gets Jaguar Land Rover style gear knob.

At the Geneva Show today, Tata also revealed Altroz with petrol and diesel engine option, Buzzard SUV based on Harrier and H2X Hornbill mini SUV to sit below Nexon at the same show.More details will be revealed later today, when Altroz and Altroz EV officially debuts along with H7X and Hornbill.