Ahead of its launch at Geneva International Motor Show 2019, Tata Altroz has been teased yet again and this time it’s in near-production form. At Geneva Motor Show, Altroz will be unveiled in production form. It was originally showcased as Tata 45X concept vehicle at 2018 Auto Expo.

Tata Altroz will be taking on rivals such as Maruti Baleno, Honda Jazz, and Hyundai i20, all of which are known for their elegant design. To effectively compete in the premium hatchback segment, Altroz will be aggressively styled and will pack in a host of high-tech features. 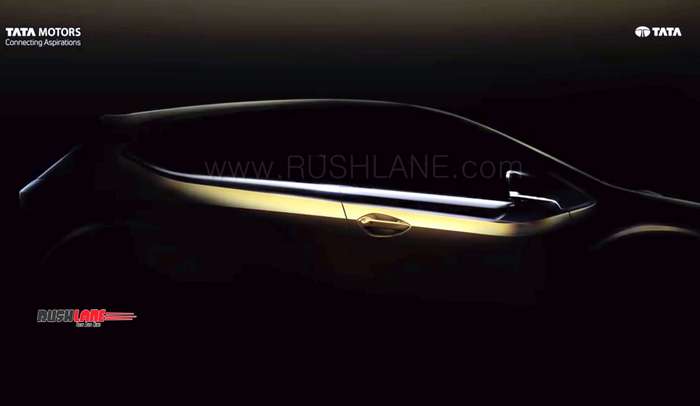 In the latest teaser, we can see the side profile of new Altroz. The shoulder line emerges from the bonnet crease and rises all the way to merge with the sloping roofline. The rear door handle is on the C pillar, similar to Maruti Swift rear door handle. In the front is a broad front grille that makes an inward stance, swept back headlamps, groovy tailgate, and edgy LED tail lamps. In the side profile, there’s the progressively rising window line, which is another unique feature of Tata Altroz.

Altroz is Tata’s first car to be based on the new ALFA (Agile Light Flexible Advanced) Architecture, which is set to spawn a range of modern, urban vehicles. ALFA Arc is modular, flexible and lightweight and it can be used to develop new models in the shortest possible time. With IMPACT 2.0 design language at its core, Altroz exterior and interior design is expected to be class-leading in the premium hatchback segment. Interiors of Altroz will have a premium look and feel and offer a range of high-end features.

Engine options can be the same as Tata Nexon, but this is yet to be confirmed officially. Altroz petrol variant could be powered by a 1.2-litre turbocharged unit that makes 110 PS of max power and 170 Nm of max torque. The 1.5-litre diesel engine on Nexon delivers 110 PS / 260 Nm. This will make Altroz diesel the most powerful in comparison to rivals. Transmission options will include manual as well as auto.

Tata Altroz will most likely be replacing Bolt, that has been unable to register strong sales. Expected on-road price of Altroz is in the range of Rs 5.5 to 8.5 lakh. Launch will be sometime in September or October to coincide with the festive season.