Tata Motors cites changes in market conditions, rising input costs and other factors making a price hike mandatory. With this announcement, Tata Motors joins the likes of Toyota and Jaguar Land Rover who have also announced a hike in price across certain models from April 2019.

Tata Motors has announced a hike on its range of passenger vehicles from 1st April 2019. The hike will be as much as Rs.25,000 with the company citing many reasons for this hike such as rising input costs, market conditions and other economic factors.

This is the second price hike this year and that too in 3 months, as in January, the company had increased car prices by Rs.40,000. Tata Motors is also increasing the price of the Tata Harrier which was launched in India in January. Below is the average increase in price of Tata cars on sale across India. 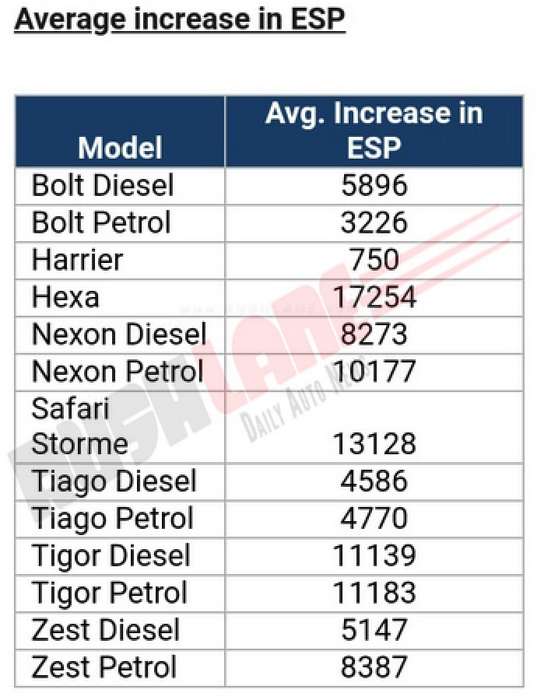 Tata Motors is also increasing prices of the Tiago, Tigor and Zest. The Tiago diesel and petrol variants will be higher by Rs.4,586 and Rs.4,770 respectively while the Tigor diesel and petrol will see prices hiked by Rs.11,139 and Rs.11,183 respectively. The Tata Zest diesel variant will be priced higher by Rs.5,147 and the petrol variant by Rs.8,387.

In terms of the upcoming models from Tata Motors, the company is currently working on testing the Tiago, Tigor and Nexon facelift. In addition to this, they are also working on launching all new Altroz premium hatchback as well as 7 seater version of the Tata Harrier, called the Tata Buzzard as on date. They will also launch a small SUV next year, called the H2X concept as on date. All new Tata cars will come with 5 star safety rating, just like Nexon.