With the launch nearing, Tata Motors has been aggressively carrying out pre-launch testing in recent times

The year 2020, despite being disappointing for many obvious reasons, has seen many new introductions to the automobile market which has kept the auto enthusiasts engaged. The new launches although delayed mostly due to the ongoing pandemic will continue for the rest of the year and the trend will continue for next year as well.

Speaking of new launches, Tata Motors has quite a few of them up its sleeve in the coming months. It started its year with the launch of Altroz which fits into the premium hatchback space and then introduced the Harrier automatic later in March. At AutoExpo 2020, held earlier this year, Tata showcased many of their upcoming models in almost final production-spec. Out of those, two of them have been spotted quite regularly.

The upcoming 7-seater version of Harrier- the Gravitas and Tata’s upcoming entry-level SUV- HBX were recently spotted testing. Tata Motors has been aggressively carrying out the testing of these two vehicles recently and have been spotted on different occasions. 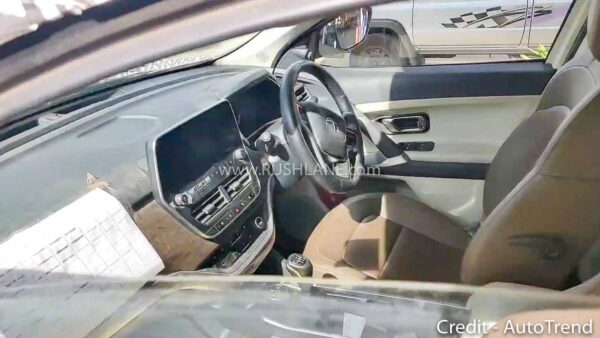 The Gravitas will carry most of its elements from its younger sibling- Harrier with minute changes. The SUV will be offered in a three-row seating layout with both 7-seat and 6-seat configurations, the latter being offered with two captain seats in the middle row. In terms of dimensions, the Gravitas will measure 4,661mm in length, 1,894mm in width and 1,786mm in height. This will make it 63mm longer, 72mm wider and 80mm taller than Harrier.

For added headroom for the third-row passengers, the roof of the Gravitas has been stepped-up. The overall exterior design will be similar to that of its sibling. On the inside as well, the dashboard will bear resemblance to the Harrier except for a change in colour scheme. It is also set to carry forward the same features as that found in Harrier. Below is walkaround video of test mule by AutoTrend. It was spotted inside a petrol pump.

As far as the powertrain is concerned, it will be powered by the same 2.0-litre Kryotec turbo diesel unit which is sourced from Fiat. This engine is good to produce 170PS of power and 350 Nm of peak torque. Power will be sent to the wheels via a 6-speed manual transmission as standard with the option of a 6-speed automatic as well. Once launched, Gravitas will take on Hector Plus.

Other than the Gravitas, Tata has plans to launch two more cars. One is Altroz turbo petrol variant and the other is HBX mini SUV. Of these, it is the Altroz turbo which is expected to be launched first, by Diwali this year. While Gravitas launch could take place in Jan 2021, followed by HBX launch in March 2021.