The Tata Harrier’s interior represents significant improvement by the automaker. The flagship crossover’s dashboard is very well laid out, has amiable colour combination and decent levels of quality. In short, Tata Motors did not leave a lot to be desired.

The owner of this particular modified Tata Harrier, however, thought there is room for improvement and personalization. The premium mid-size crossover has been given a completely overhauled interior trim. The default black and brown colour theme has been replaced by a much bolder white and blue combination. 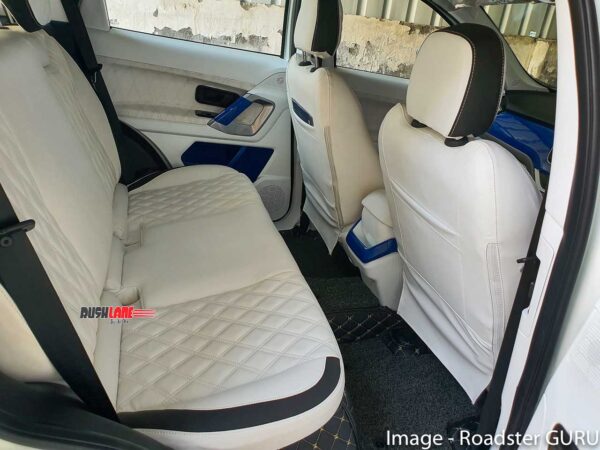 It has to be said that the modification done by Noida-based Roadster Guru has been very well executed. The faux wooden trim on the dashboard has been replaced with glossy blue accent while the lower half receives white finish. The steering boss, door panels and the diamond quilted leather seats are also swathed in white.

We particularly like the black leather trim around the interior door handle with blue contrast stitching. As far as interior equipment is concerned, the modified Tata Harrier has been left untouched. The changes are purely cosmetic.

On the outside, the SUV gets a custom white chin on the front bumper and a rather tacky looking white diffuser with fake exhaust tips at the rear. Anyway, this particular Harrier does look unique.

There seems to be no mechanical change whatsoever. The Tata Harrier recently received BS6 upgrades. Prices went up by nearly INR 70,000. The most significant change is the 2.0-liter FCA-derived diesel engine which now develops 170 hp, 30 hp more than the previous version. It also receives a new 6-speed automatic transmission option which wasn’t available before.

Tata Harrier petrol on its way

There is also a petrol variant in the works with a brand new 1.5-liter Revotron turbocharged unit. The motor is likely to output somewhere in the vicinity of 150 hp and 250 Nm of torque. Both manual and automatic transmissions are expected to be on offer. With the buying trend slowly shifting towards petrol even in the SUV segment, the new engine option would go a long way in boosting the Harrier’s appeal.

The Tata Harrier petrol variant has been out testing for quite sometime now and we expect to be introduced in the coming months. The new variant will be pitted against the petrol versions of the MG Hector.