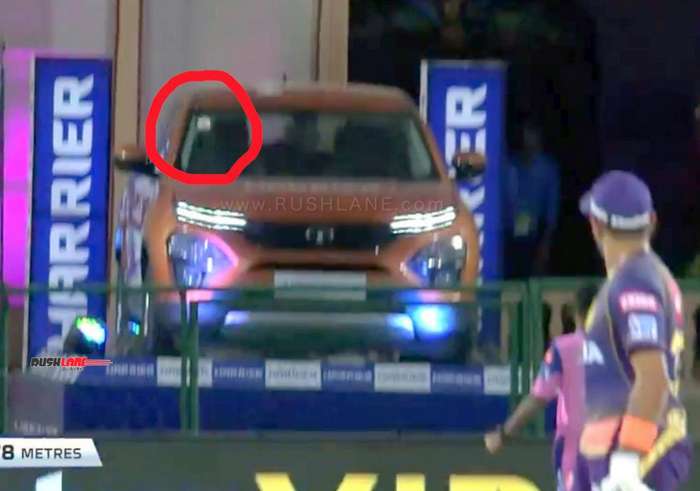 As a part of this deal, Tata Motors gets to display Harrier inside the cricket stadium during all the matches of IPL T20 this year. The SUV is usually placed near the boundary line, where there is always a tiny possibility of a ball hitting the car.

In match no 21, which was being played between Rajasthan Royals and Kolkata Knight Riders, a ball on its way for a SIX, did hit the Harrier, on its windscreen. The batsman who hit the six is Chris Lynn from KKR while the bowler is Shreyas Gopal from RR. The match was being played in Jaipur. The official website of IPL T20 has now listed the video with the title – “TATA Harrier strong enough for a Lynnsane SIX”. Why is the Harrier called strong here? Well, watch the video below.

Built on the OMEGA platform, Tata claims that Harrier is one of the safest SUVs on offer in the country. In fact, Tata has promised that all their new cars will come with best in class 5 star safety rating. Tata’s Nexon SUV became the first ever made in India car to get a 5 star safety rating.

Priced from about Rs 13 lakhs, Tata Harrier is off to a good start where sales are concerned. Harrier posted sales of almost 2.5k units last month. The company has an order book of about 10k units, while waiting period is at 3-4 months. It is currently only offered with a diesel 2 liter engine option, mated to a manual transmission.