The early 2019 Tata Harrier launch is an anticipated one. Expected to bear a price tag of Rs 16 – 21L (on-road), it belongs to a competitive, small, and high expectation segment.

With bookings open, and media drives concluded, there’s little that’s left to be revealed at the time of launch, except of course the price of Tata harrier. Here is a quick look at how the Harrier looks on the road, when placed next to a Tata Nexon and Mahindra XUV500.

Tata Harrier easily looks a lot bigger than the Nexon. No doubts there. But, when placed against the Mahindra XUV500, the Harrier does not look bigger in the picture. This inspite of the fact that it is longer than the XUV500. The XUV500 does looks a bit more muscular than the Harrier in the photo above. This could be because of the sloping rear design of Harrier, as against the conventional butch design of XUV500’s rear.

But, Tata Harrier is a truly world class SUV, as it borrows several of its features from Jaguar Land Rover (JLR). The Harrier gets three driving modes of City, Eco and Sport align with a Terrain Response System with Normal, Rough and Wet modes. Its exteriors boast of projector lens headlamps, LED DRLs, LED tail lamps, follow-me-home lamps and ORVMs with integrated turn indicators. Its feature rich interiors receive a brown and black color scheme with faux wood inserts and either premium fabric or leather upholstery options. 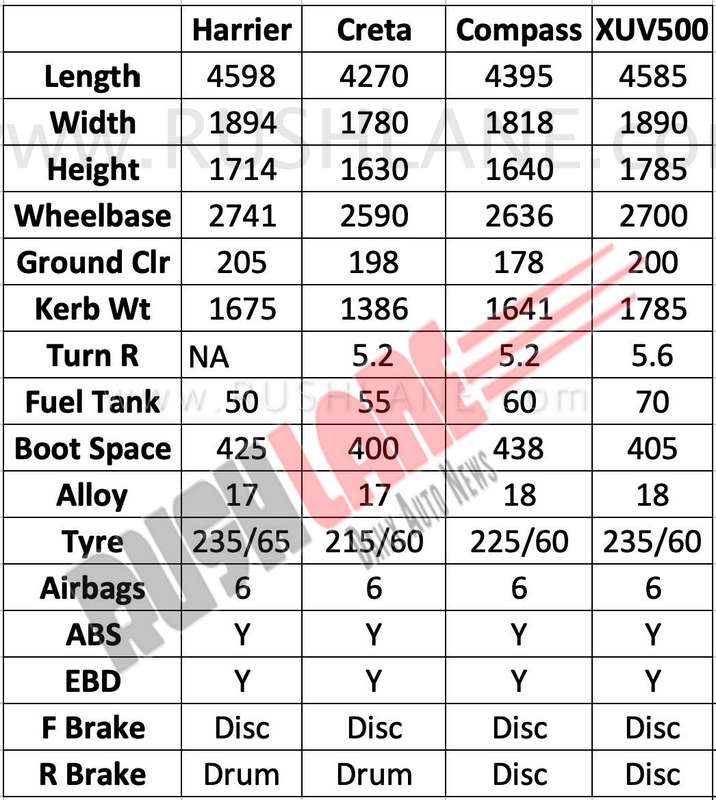 Tata Harrier is powered by a 2.0 liter diesel engine. The engine will produce 140 bhp power and 350 Nm torque mated to a 6 speed manual transmission. It gets an electric variable geometry turbocharger – eVGT. The engine is light in weight and offers low friction valve train architecture for silent operation. The engine is also presented in advanced exhaust gas recirculation and after treatment system ensuring a low carbon footprint.

From 18th Dec, Tata Harrier will go on a 11 city tour across India. It is during this tour, the car will make its public debut. Prospective buyers will be allowed to check the car out in detail, and even book the car at the same time.