Tata Nano, touted as the World’s Cheapest Car and Ratan Tata’s dream venture, has probably seen the end of its lifecycle. The company has plans to bring production to a complete halt following minuscule sales. There was zero production reported during the month of January 2019.

This was the first time since Nano was launched in 2008 that not a single unit of Nano were either produced or sold in an entire calendar month. Tata Nano was also pulled out from export markets such as Nepal, Bangladesh and Sri Lanka from early 2018.

Non compliance with new safety regulations coming into effect and the hefty investment involved in making its engine comply with new BS VI emission norms are the main reasons for Tata Nano likely to be axed from the company lineup. None of the variants of Tata Nano include any airbag and hence production will have to be stopped after April 2019 which is when all cars sold in the country will have to have at least one airbag as a mandatory safety feature. However, company officials have not offered any confirmations in this regard as speculations cannot be based on a single months sales figures. The company has stopped production in July 2018 from its Sanand plant while production was conducted exclusively on order basis. 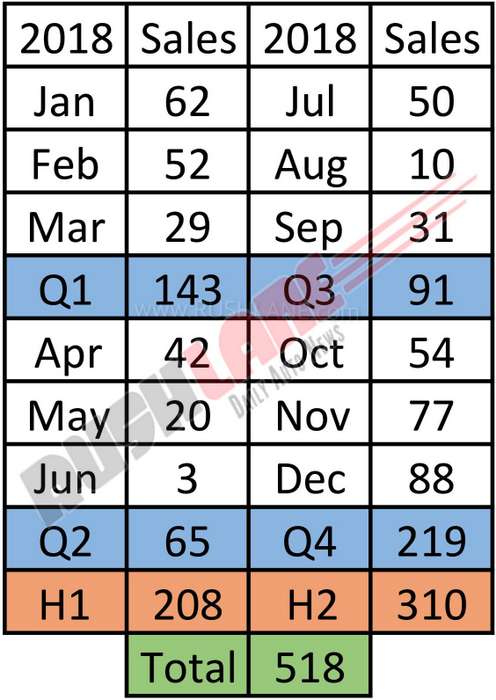 As per the 2018 sales figures, Tata sold a total of 518 units of Nano, averaging at about 43 cars sold a month. These are really low numbers, which was probably expected to sell about 20,000 units a month.

Tata Nano, unveiled in January 2008 at the Auto Expo went on sale in March 2009 with a price tag of Rs.1 lakh. It faced constraints right since launch. It was expected to be produced from the company’s proposed plant in Singur, West Bengal where certain protests were seen from both political and farmer fronts in terms of land acquisition. This caused Tata Motors to shift production to Sanand, Gujarat. There were initial reports of the Tata Nano catching fire while this was followed by Ratan Tata admitting that promoting the Nano as ‘the cheapest car’ was another mistake and hence the Tata Nano continued its loss making journey to reach this end. Tata Motors has earlier even withdrawn models like the Indica, Indigo, Manza, Vista, Sumo and now the Nano is said to follow suit.