Tata Nexon Kraz in Tromso Black was launched in India in September 2018 in celebration of the first anniversary of the Tata Nexon.

However, having received well by customers, the company has now introduced a white color option called Calgary White. Both these colors are being presented exclusively on the Tata Nexon XT variant and both will come in two trims of Kraz and Kraz+. Price is same of both colours. 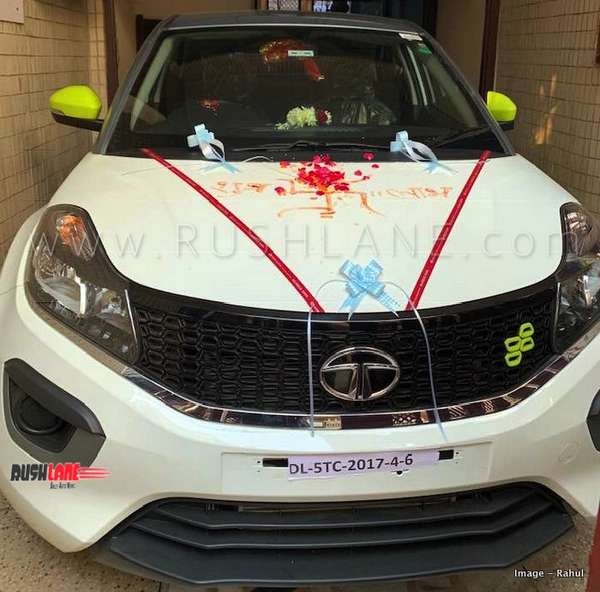 Features on the Tata Nexon Kraz Calgary White will include 10 styling upgrades inside and out as is seen on the Tromso Black edition. On its stark white color scheme, it will also continue to sport new green accents across its exterior and interior makeup with dual tone roof on the exterior and a sonic silver roofliner inside. Exteriors will also sport Neo Green color on its ORVMs, wheels and front grille while Kraz or Kraz+ badging will be seen on its boot lid.

The Neo Green color scheme continues to its interiors with stitching on seats while the dashboard in piano black also sports Neo Green accents along with accents on its air vents. The doors, console and steering wheel is finished in piano black.

Nexon Kraz Calgary White edition gets a 4 speaker Harman system, steering mounted controls while features also include automatic AC controls with vents at the rear and reverse parking sensors. There is no infotainment system offered on the Nexon Kraz.

Tata Nexon was recently awarded a 5 Star rating in safety by Global NCAP, making it the most safest car ever produced by an Indian car brand. The Nexon Kraz Black and White is priced from Rs 7.28-8.8 lakhs, ex-showroom.