Tata Safari owner modifies his SUV into a 6 wheeler, 10 seater 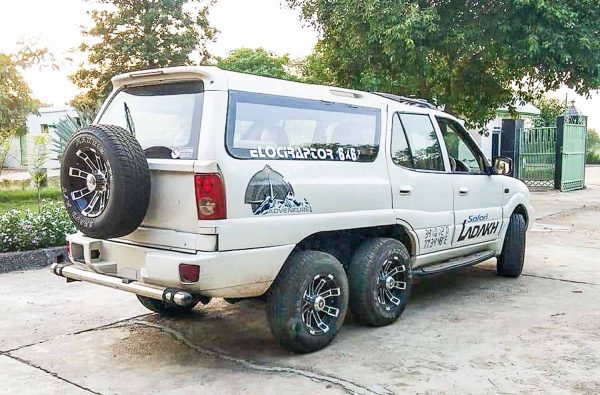 India is not new to extreme modifications and we have shared many such projects over the years. Amid several good examples that strike an optimal balance between form and function, Indian vehicles often fall prey to ridiculous alterations that cannot be justified by logic.

Some of these projects were done just for the fun of it. For instance, we had recently shared a Premier 118NE that was modified into a heavily-discounted Rolls-Royce Phantom Drophead. The work, on paper, breaks all the ethics associated with proper automotive customisation. But it is clear that the open-top car can offer a ton of fun.

In the world of hardcore off-roaders and SUTs (Sports Utility Trucks), the Mercedes-AMG G63 6×6 and Hennessey VelociRaptor 6×6 (based on Ford F-150 Raptor) have grabbed a lot of attention; so much so that several SUVs or pick-up trucks were cut open to look like them. Here is one such creation from Haryana: 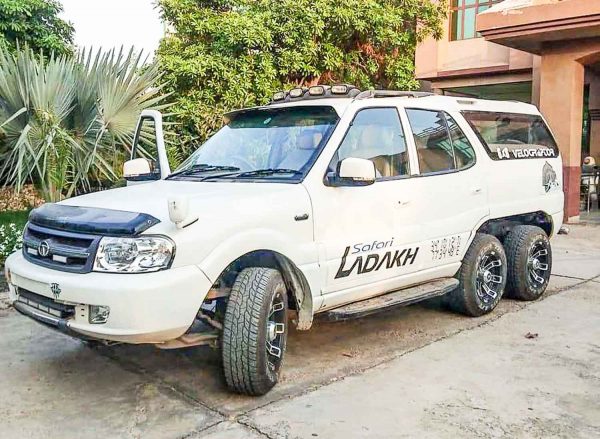 The modification, dubbed ‘Tata Safari Velociraptor 6×6’ (as its sticker work suggests), was completely done at a local workshop. Despite having six wheels (minus spare), the SUV still remains a 4×4 with an extra dead axle (non-powered axle). It is essentially a Tata Safari ‘6×4’. We do not think the local transport authority would find it easy to ignore.

Apart from the obvious, the Tata Safari 6 wheeler gets minor black treatments, stone deflector, auxiliary lamps, eight-spoke alloy wheels shod with deep-treaded rubber; rear bumper guards, fender mirror and random stickering. One can say that the vehicle does not get any added mechanical advantage since the extra set of wheels are not part of the powertrain. In fact, its performance could retard a bit due to additional weight. On the bright side, the extended third compartment alone can seat six passengers with relative comfort thanks to regular benches placed on either side.

The focus was most likely extra seating. As a result, installing a third axle might have become a necessity. Usability, especially in tight traffic or narrow road conditions, may not be particularly good but on a positive note, it is much better than a Force Traveller — a comparison made purely in terms of seating capacity.

This project is clearly based on a third-generation 2007MY Tata Safari facelift. Back in the day, it made 138bhp and 320Nm of torque from a Euro4-compliant 2.2-litre DiCOR diesel four-cylinder mill. The engine is mated to a 5-speed manual transmission which sends the output via an optional Borg-Warner four-wheel-drive system.