Massive decline in volumes continued across the auto industry in August 2019. Every major automaker in the country, which included Maruti Suzuki, Hyundai, Honda and Mahindra reported double digit decline in sales. Of all major brands, it was Tata Motors which reported the worst sales decline; reporting its lowest ever sales in nearly two decades.

Taking into account domestic passenger vehicle sales, it may be noted that sales were largely made up by the Tiago and Nexon, which together constituted nearly 75 percent of total PV sales in the past month despite massive de-growth. 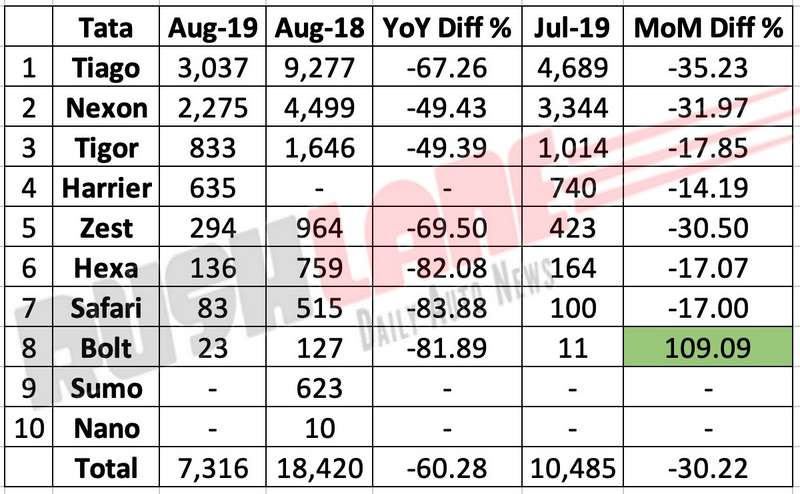 Tata Nexon sales dipped 49 percent in August 2019 to 2,275 units as compared to 4,499 units sold in August 2018. Sales were also lower by 32 percent when compared to 3,344 units sold in July 2019. Sales of the Nexon have been on the ebb ever since the launch of the Hyundai Venue and Mahindra XUV300 while a facelift of this model is also in the works wherein the updated compact SUV will get BS VI engines.

Sales of the Tata Tigor also fell 49 percent to 833 units in August 2019 as compared to 1,646 units sold in August 2018. July 2019 sales of the Tigor were at 1,014 units with a fall of 18 percent in August 2019. Tata Tigor competes with the Maruti Suzuki DZire, Honda Amaze and Ford Aspire. A facelift is under development and last month, the company was offering the current generation Tigor at a cash discount and exchange benefits upto Rs.1.15 lakhs.

Tata Harrier, launched earlier this year also took a beating in August 2019. Sales which had stood at 740 units in July 2019 dipped 14 percent to 635 units in the past month. This midsized SUV has been facing some heat ever since the launch of the MG Hector and Kia Seltos. The company introduced various updates with sunroof, dual tones and Dark Edition to keep the model fresh.

Tata Zest sales which had stood at 964 units in August 2018 dipped to 294 units in the past month. Sales were also down 30 percent as compared to 423 units sold in July 2019. The Tata Zest sedan was a also a part of the company’s discount offers wherein customer could avail of a discount upto Rs.75,000 through the festive season.

Tata Motors has announced discounts for the month of September upto Rs.1.8 lakhs on the Nexon, Hexa, Harrier, Tigor and Tiago under the “Festival of Cars” campaign. The company has also tied up with multiple banks and financial institutions for upto 100 percent on-road finance.