Honda Activa was at No.1 despite 17.36 percent de-growth

Two wheeler sales in India have been noting a steady rise over the last two months as most states are easing out of the lockdown. Demand is rising for personal mobility over use of public means of transport. This has resulted in most two wheeler makers in India experiencing an increase in the number of buyers visiting showrooms.

Total scooter sales in the country stood at 4,24,764 units, down 6.04 percent as against 4,52,053 units sold in August 2019. Honda Activa maintains lead at No. 1 on the list of top 10 best selling scooters in India in August 2020. It was followed by the TVS Jupiter and Honda Dio in quick succession. 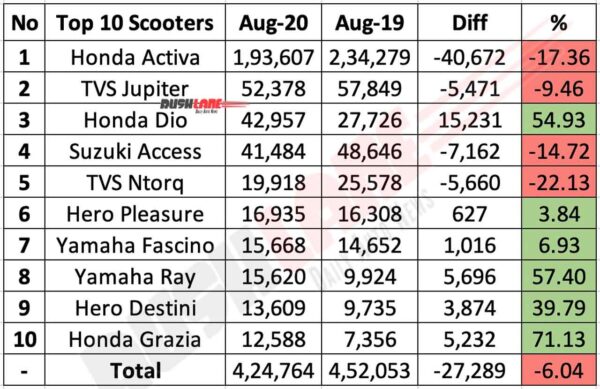 TVS Jupiter saw a total of 52,378 units sold last month, down 9.46 percent over sales of 57,849 units sold in August 2019. The Jupiter also recently received a ZX Disc variant with i-TOUCHstart for silent starts at Rs 69,000 while last month the company revised prices of the Jupiter range with all variants receiving a hike of Rs.1.040. This was the second price hike this year with the earlier increase in prices in June 2020 by Rs.651. TVS Motors also had the Ntorq at No.5 with sales dipping 22.13 percent to 19,918 units in the past month as against 25,578 units sold in August 2019.

Suzuki had its Access scooter on the list with sales of 41,484 units last month. This was a de-growth of 14.72 percent when compared to 48,646 units sold in August 2019. It was however, a MoM increase as against 23,171 units sold in July 2020 showing that sales of scooters are gradually on the rise after a tumultuous 4 month period following the lockdown announced in March 2020.