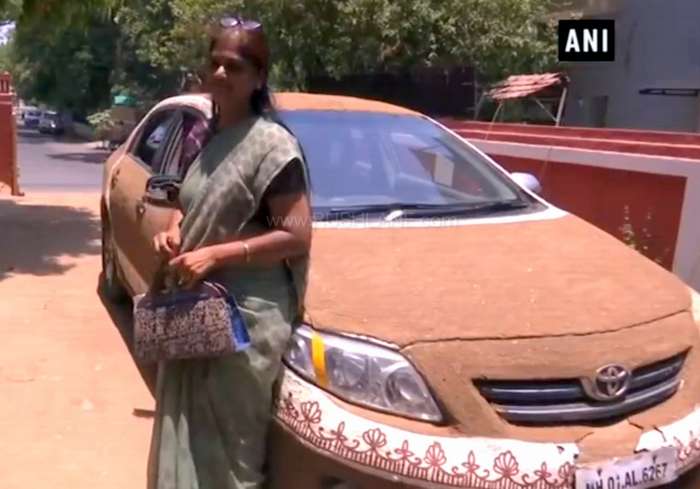 A photo circulating on social media this week, which at first glance seemed so bizarre that it couldn’t be true, is in fact as real as it gets. At the onset, it is a measure to combat heat. Sejal Shah from Ahmedabad coated her car with cow dung to keep it cool attributing cow dung as a natural air conditioner. The Toyota Corolla Altis has been embalmed in cow dung and the folks undertaking the job have also added a personal touch by drawing motifs through the body of the car.

The lady in question has great belief in cow dung’s cooling properties nad has used it in her house, room, and flooring. She draws from her experience of getting coolness from it in summer, and warmness from it in winter, and decided to use that experience as a benchmark to cool her car.

Her reason is simple. When going out in summer, she wanted an alternative to using an ac which pollutes the air, and the gases it emits are harmful for everybody. She wished to find a solution which is non-violent, non exploitable, and which can prevent nature from being exploited for creature comforts owing to the resources we use. This determination led her to think in the lines of a natural alternative. She chose to use a natural resource, which doesn’t exploit anything around us, or nay living creature around us.

What Sejal Shah is claiming, has not been scientifically proven. In fact, more than benefits, applying cow dung will most likely have negative effects on your car, especially on the paint and the cooling system. In an earlier post, we showed how wrapping your car with cow dung will have no effect on the cooling system of the car. Not only it adds weight to the car, it also screws up the aerodynamics.

Most of the cabin heat is collected via the windows and windscreen. That is from where the heat enters, and not from the body. The body paint infact makes sure that less heat is retained, as was confirmed by the handheld infrared based thermometer in the previous post. For the same car, which is parked under the sun, exterior body temperature is about 50 degrees C, while the interior cabin temperature is about 100 degrees C.

The heat which enters via the glass, is captured inside the cabin as the material is dark. Cabin continues to retain heat, and becomes hotter and hotter. The longer you keep under the sun, the more hot it gets. The best way to keep you car’s cabin cool, is to keep it under a shade. Other option is to use dark films on windows, but that has been banned and is now illegal. Modern cars come with reflective glass, which is slightly tinted. These are legal, and are far more helpful (than the cow dung), in making sure that the cabin stays cool.