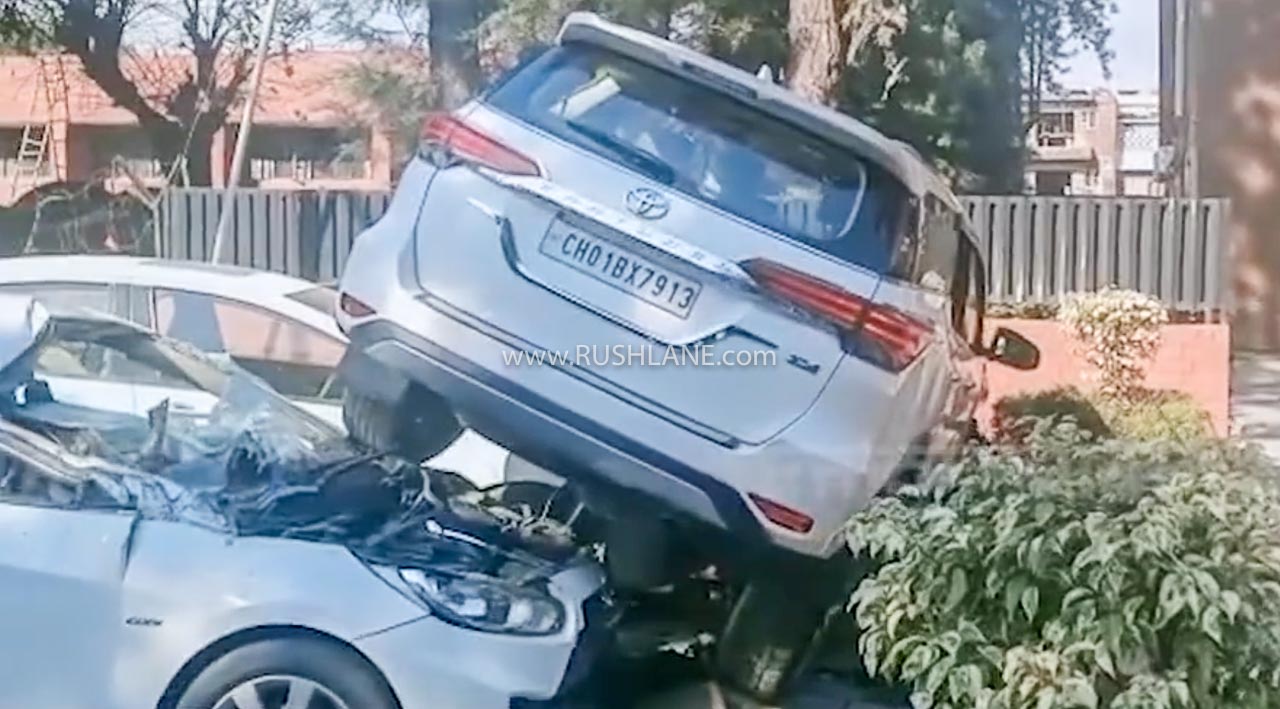 We have seen our fair share of freak car accidents caught of tape (as you know, there is no shortage of accidents in our country) but this incident which occurred recently in Chandigarh will be a tough one to forget.

A CCTV footage shows that a Toyota Fortuner SUV coming towards a T junction at a decent speed. The SUV fails to slow down as it approaches the junction. In no time, the SUV takes a flight and lands on two cars (Honda City and Hyundai Verna), which were in a designated parking spot.

It is clear that the Toyota Fortuner approached the T-Junction too fast that even without the perpendicular impact from the sedan, it would have crashed into those unfortunate Hyundai Verna and Honda City which were parked. Watch the video below.

The fact that a full sized SUV took flight due to a side impact appears counterintuitive but if we look closely, the Fortuner hit the footpath head-on at a serious speed lifting the front end. Though the probability of such a thing happening in a real world condition is extremely thin, the Fortuner received frontal (due to tyres hitting the kerb) and side impacts at exactly the same instant, thus destabilizing it enough to fly like in a Hollywood movie sequence.

According to a local news report, the driver of the Fortuner is a 23 year old man. He has been injured and he was already suffering from an unknown health issue. This could explain why the SUV failed to slow down as it approached the T-Junction.

Fortunately, the sedan which collided with the Fortuner didn’t suffer major damage. The same cannot be said to the Verna which seems to have suffered the most damage. Luckily, neither the Verna nor the City was occupied.

In a scenario like this, it is the responsibility of the Toyota Fortuner driver to have come to a stop before merging into the other road. But if there is a health issue, then it becomes very difficult to avoid a mishap. From what we can make out from the video, the driver of the Fortuner was already unconscious and had to be helped out by passers by, who are seen breaking the window of Fortuner.

We are glad that no innocent bystander got caught up in the middle of what could have easily been a fatal accident. We sincerely hope that the driver of the Fortuner makes a complete recovery.