Within just 12 months from launch, Toyota Kirloskar Motor has sold 25,346 Glanza units in the country. Based on the Maruti Suzuki Baleno hatchback, the Glanza is the most affordable offering in the Japanese automaker’s Indian portfolio.

It was in May 2019 that Toyota Kirloskar Motor (or Toyota India) introduced the Glanza. It is the first product to come under the joint venture between Maruti Suzuki and Toyota Motor in the Indian market. The next product would be the rebadged Vitara Brezza compact SUV, dubbed the Toyota Urban Cruiser.

The Toyota Glanza BS6 is offered in two variants: G and V. They are analogous to the Maruti Suzuki Baleno’s Zeta and Alpha trims, respectively. The Glanza receives only minor modifications over its Maruti Suzuki counterparts, such as the revised two-slat chrome front grille, badging and a ‘Sporting Red’ paint finish. Its interiors are seen with a modified version of Maruti Suzuki’s latest Smartplay infotainment system which Toyota refers to as ‘Smart Playcast Audio System’. 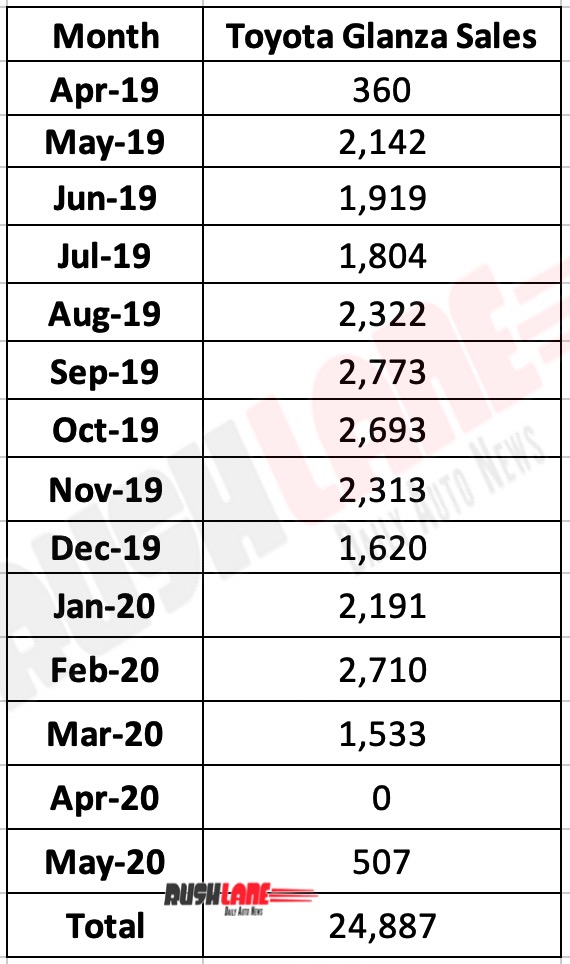 Though launch took place in June, dispatches of Glanza to dealers started in April. Despite the constraints over the past few months, sales have crossed the 25,000-unit mark (including the sales of June 2020). The initial demand was buoyed by some added benefits offered by the company. Toyota offers a warranty package of ‘3 years / 1 lakh kilometres’ on the Glanza as against a ‘2 years / 40,000 kilometres’ scheme for the Maruti Suzuki Baleno.

Ever since the Toyota Glanza’s debut, the Japanese automaker noted demand from a new segment of buyers. Dealerships found that more than 60 per cent of buyers were non-Toyota customers. The hatchback has also become a desirable secondary choice for a two-car garage. 70 per cent of the demand came from Tier I and Tier II cities. The remaining 30 per cent was from smaller cities and rural areas.

For the month of June 2020, the Toyota Glanza was offered with discounts and benefits worth up to Rs 47,500 so as to stir up sales after a three-month dip in demand. This includes a cash discount of Rs 15,000 and an exchange bonus of Rs 15,000. An additional discount of Rs 17,500 was applicable exclusively for frontline COVID-19 workers (doctors, healthcare staff, military and police personnel).

The Toyota Glanza is powered by a 1.2-litre NA petrol engine offering 82bhp and 113Nm torque. This is mated to either a 5-speed manual or CVT. It competes with the Tata Altroz, Volkswagen Polo, Honda Jazz and Hyundai i20 (awaits a model upgrade).