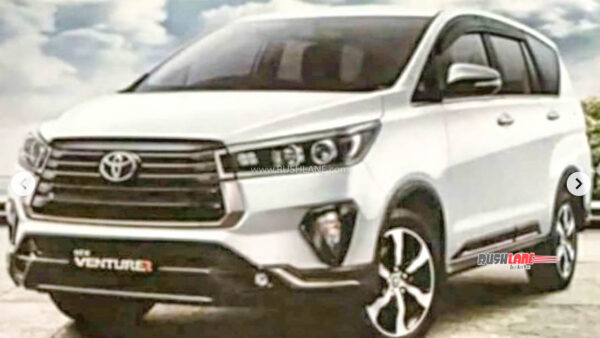 The first generation Toyota Innova MPV had ruled the segment for 11 years with regular updates. The second generation model was launched in 2016 and bore the name Crysta. However, time is right for another update and the 2021 Toyota Innova Crysta is being actively tested ahead of launch in South East Asian countries of Thailand, Vietnam, Indonesia, etc.

The 2021 Toyota Innova Crysta will initially be launched in Indonesia, where dealer dispatches have already commenced. It is slated to launch in India sometime later this year or in early 2021. India-spec Innova Crysta facelift will be similar to the one seen in the brochure and images below.

The Innova Crysta will be seen with several exterior and interior updates. However, engine specifications for the Indian market are likely to remain unchanged as it was recently updated to comply with the new BS6 emission standards. Below is the leaked brochure of facelifted Innova Crysta, credit to Indra Fathan.

Exterior updates include a refreshed front fascia. While the hexagonal grille design is retained, it now sports more refined and sharper edges. The slats get revised with chrome surrounds while the Toyota badging has been removed. The Innova facelift also sports a new front bumper design, fog lamps which are set deeper into the bumper and new LED projector headlamps.

New exterior colour options have been added to the palate and the model on test was spied in a white colour scheme. The rear design remains unchanged with wrap around LED tail lamps. The 2021 Toyota Innova Crysta also gets new alloy wheels which will be offered in standard silver colour or a darker finish depending on variant.

On the inside, the automaker has brought in some revisions to the facelift with a larger 9 inch touchscreen infotainment system with Android Auto and Apple CarPlay, revised seating and other cabin updates. Wireless charging could also be on offer, along with 360 degree camera park assist on top variants.

2021 Toyota Innova Crysta will see no change in engine or transmission options. The current Innova is powered by a 2.7 liter petrol engine generating 166 hp power and 245 Nm torque. The 2.4 liter diesel engine makes 150 hp power and 343 Nm torque when mated to manual transmission going up to 360 Nm in automatic.

Both the petrol and diesel engines are offered with manual as well as automatic transmission options. In Indonesian markets, where it is known as the Kijang Innova, the facelift will continue to get its power via a 2.0 liter petrol and 2.4 liter diesel engine.

Sales of Toyota Innova in India are on a decline. In 2020, for period from Jan to Sep, sales of Innova are about 24k units. This is more than 50% decline in sales, when compared to the same period of 2019. Facelifted Innova could help the company increase sales in coming months.

The feature updates would see the new Innova Crysta facelift priced at a premium over its current counterpart; which ranges between Rs.15.66-24.67 lakhs, ex-sh. It will continue to rival the likes of Mahindra Marazzo and Kia Carnival. Launch in India is slated for the months ahead, following the launch of the Toyota Fortuner facelift which will arrive in the next few weeks.