A market-ready example of Toyota Innova Crysta TRD Sportivo has been spotted in Indonesia ahead of its imminent launch there. TRD Sportivo variants are visually embellished versions of regular Toyota models targeting younger audience.

In India, Toyota Kirloskar Motor (TKM) has used the TRD Sportivo branding for its Fortuner and Etios twins previously. With festive season coming, the automaker could be thinking of a similar Innova Crysta variant for our market. The Toyota Innova Crysta TRD Sportivo spotted in Indonesia features loud body kits all around.

The front bumper receives a sharper chin with pseudo air-intake on either side. The grille receives additional chrome accents but thankfully Toyota did not go overboard with the shiny treatment. In profile, the highlights of the sporty variant includes 17-inch black finished alloy wheels, side skirts and TRD Sportivo decals on the base of the rear doors. A TRD Sportivo badge on the tailgate and a bumper extension round off the exterior enhancements.

The interior has not been revealed as of now but going by the previous TRD Sportivo editions, one can expect special upholstery with TRD branding, matching floor carpets and exclusive dashboard and doorpad accents. We expect the equipment level to be based on the mid-level and top-end trims.

Most of the visual features of the Innova Crysta TRD Sportivo can be seen on the Touring Sport variant which is already on sale in India.

Though TRD stands for Toyota Racing Development, we don’t expect the Innova Crysta TRD Sportivo to feature any significant mechanical change. The model spied in Indonesia was equipped with the 2.4-liter four-cylinder turbo diesel engine which dishes out 150 hp and 360 Nm of torque. The India-spec Innova employs the same engine and is offered with a 6-AT and a 5-MT (manual variant outputs 343 Nm of torque).

The Indian Innova Crysta is also available with a 2.7-liter petrol engine outputting 166 hp and 245 Nm of torque. The transmission options are identical to those of the diesel variant. 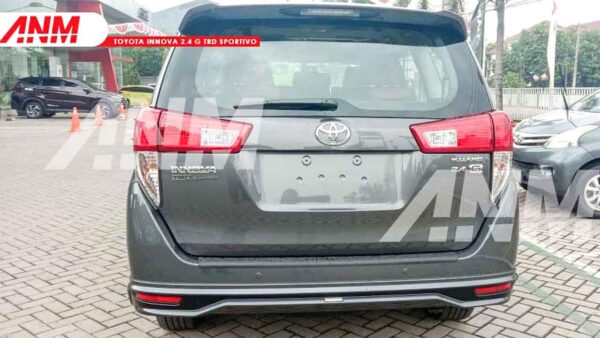 Considering that the Toyota Innova Crysta is an important product for the automaker in India, a variant extension is a good idea, especially when the current scenario warrants a marketing push. That said, TKM has not made any official announcement regarding the TRD Sportivo variant of its popular premium MPV.