Traffic fines in India compared with US, UK – By Police

In what is drafted as an attempt to justify to some extent just how inexpensive the amended penalty for traffic violations are, Hyderabad Traffic Police has shared an infomercial.

The shared content skips on details like GDP, exchange rate, development of country, infra expenditure, or any such basic premise essential to such comparisons.

One variable that can be considered is as follows. In Germany, if blood alcohol level is registered at 1.1 mg/ml, it’s a criminal offence and one is taken to court. For those who are 21 years old and has had a driver’s licence for at least 2 years, legal alcohol limit of 0.5 mg/ml. Those under 21 have a legal limit of 0.0 mg/ml. 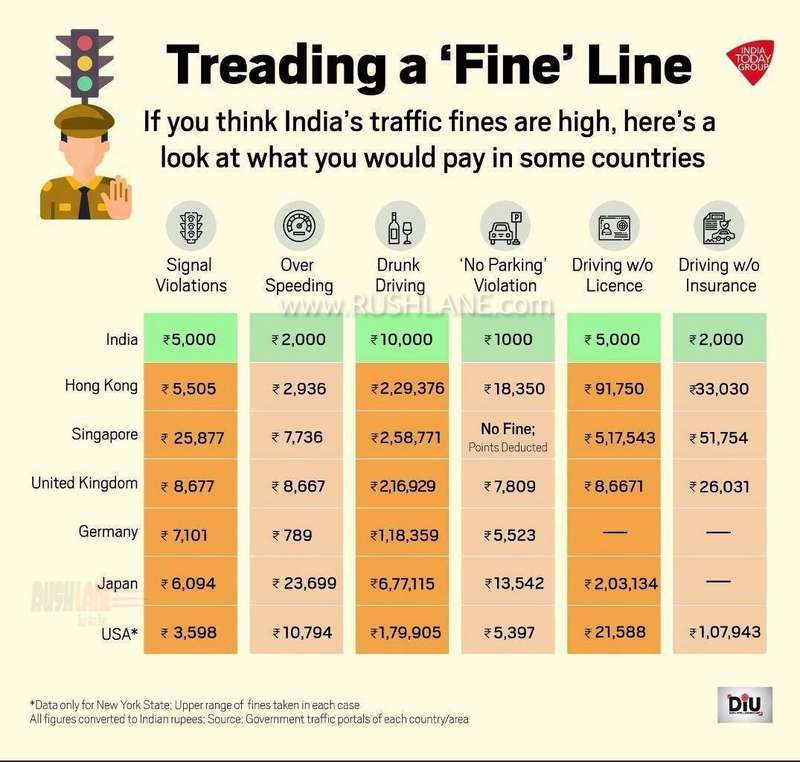 Legal alcohol limit in US and UK are the same. BAC (blood alcohol concentration) of .08 grams per deciliter of blood (g/dL) or higher1 – is the same as UK’s legal limit of 80 milligrammes of alcohol per 100 millilitres of blood. Utah’s BAC limit was revised in December 2018 to .05 g/dL).3.

In Germany, fines range form € 500 to € 1500. Long driving bans are imposed, and points struck off your driving license. The infomercial lists drunk driving fine in Germany as Rs 1,18,359. This however is the capped rate.

Hong Kong’s maximum blood alcohol level (BAL) is 55 mg of alcohol per 100 ml of blood, or 0.22 mg alcohol per litre breath alcohol content (BrAC). Fines for drivers found impaired is as follows – Maximum fine of HK$25,000 and imprisonment for 3 years. Disqualification from driving for not less than 3 months on first conviction, and not less than 2 years on second or subsequent conviction alongwith 10 driving offence points.

The infomercial again uses the maximum penalty of Rs 2,29,378 as against the bare minimum when it comes to listing drunk driving charges in India. India also holds the dubious record of most road fatalities. This almost 1.49 lakh in 2018. A developing nation, the government has set a target to construct 7,000-km roads under the Pradhan Mantri Gram Sadak Yojana (PMSY) during 2019-20 at a budget of Rs 3,936.04.

Even speed limits for countries vary. IN UK, cars and motorcycles (including car-derived vans up to 2 tonnes max laden weight) have to adhere to a minimum speed limit of 48 kmph and max limit of 113 kmph. USA has varying limits across states.

In Japan, driving without a driver’s license is punishable by imprisonment not exceeding one year, or a fine not exceeding 300,000 yen. The infomercial lists this as Rs 2,03,134, which is in fact the cap.